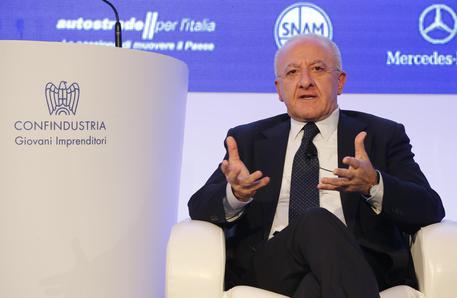 (ANSA) - Rome, November 11 - Campania Governor Vincenzo De Luca said Wednesday that he was the injured party after it emerged that he is among seven people under investigation in a corruption probe launched by Rome prosecutors.
Anna Scognamiglio, one of the Naples judges who in July upheld De Luca's appeal against a suspension linked to a previous abuse-of-office conviction, is under investigation for suspected corruption in relation to the probe. So is Nello Mastursi, who this week quit from his position as head of De Luca's regional secretariat, as well as Scognamiglio's husband, lawyer Guglielmo Manna, intermediaries Giorgio Poziello and Gianfranco Brancaccio and Giuseppe Vetrano, the former coordinator of the groups that supported De Luca's election campaign.
De Luca was threatened by some of the suspects under investigation with a ruling against him if he did not approve a requested nomination in Campania's health system, Rome investigative sources said on Wednesday.
This allegedly led De Luca to promise Manna a health-sector post. "I'm the injured party in this case, me and the institutions that I represent," the governor told reporters on Wednesday.
He added that he "supports fully the action of the magistrates" and urged them to keep going with the probe. The judiciary's self governing body, the Supreme Council of Magistrates (CSM), is set to take action regarding Scognamiglio, ANSA sources said.
"I don't know De Luca, nor Mastursi, nor Vetrano," said Scognamiglio via her lawyer Giovanbattista Vignola.
"I never had any form of contact with them, so I did not ask them for any favours for me or my husband and I couldn't have done so". Scognamiglio added that she kicked Manna out of the marital home after it was searched in relation to the probe in October, along with the residences of all the other suspects except for De Luca.