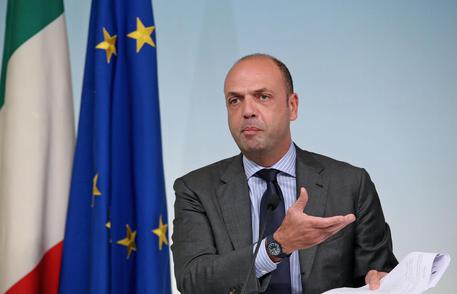 (ANSA) - Rome, November 9 - The opening of hotspots in Italy will slow down unless the pace at which refugees are relocated across Europe speeds up, Interior Minister Angelino Alfano said Monday.
Italy and Greece have agreed with the EU to set up hotspots to register asylum seekers and speed up the handling of claims, after allegations from other States that these were not being handled effectively and too many arrivals were being lost track of.
The EU for its part agreed to redistribute some 160,000 asylum seekers, mostly from Italy and Greece, whose outlying islands are the first landfall for the majority of migrants and refugees crossing the Mediterranean in search of safety from war and destitution. The EU relocation system is "in the trial phase but we are not going at the pace we would have wanted", Alfano told RAI public broadcaster's Radio One.
"We decided to proceed with the opening of hotspots at the same pace at which the relocations are happening," he said. "We committed to opening six hotspots but we've only opened one so far." His remarks came as President Sergio Mattarella spoke of the "huge effort in integration and dialogue" required to "safeguard and value the many ethnicities and religions that make up a country".
Speaking in Jakarta, Indonesia, Mattarella said EU member states must "carefully consider" what is needed "both in the process of welcoming migrants and when it comes to integrating the many people arriving daily in Europe".
Meanwhile Finance Minister Pier Carlo Padoan told German newspaper Die Welt that the advantages brought by migrants and refugees "far outweigh" the disadvantages, and we will see this "not today, not tomorrow, but in the long term".
"Europe is welcoming talented new people," he said. "This is wonderful." Friuli Venezia Giulia Governor Debora Serracchiani said "whether or not the various ministries of the interior can work together" will be one of the key elements in how Europe deals with the incoming migrants.
"This is an extraordinary and very useful opportunity in terms of Europe," she said, speaking at a meeting between countries that make up the Central European Initiative.