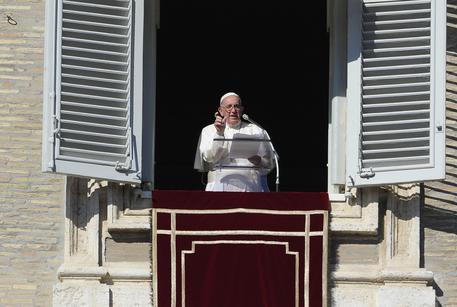 (ANSA) - Vatican City, November 9 - Pope Francis blasted the leaking of confidential Holy See documents as "deplorable" and a "crime" during his Angelus address on Sunday and stressed that his reforms of the Vatican and the Catholic Church will not be derailed.
A week ago the Vatican announced it had arrested two people, Spanish Monsignor Lucio Angel Vallejo Balda and Italian PR expert Francesca Immacolata Chaouqui, over alleged involvement in the leaks.
Both served on an advisory commission to the pope on financial reform at the Vatican. The leaks related to the publication of two books - Merchants in the Temple by Gianluigi Nuzzi and Avarice by Emiliano Fittipaldi - documenting alleged waste and mismanagement in the Vatican and lavish spending by clergymen.
"Stealing those documents was a crime. It's a deplorable act that does not help," the pope said.
"I wish to reassure you that this sad event certainly does not deter me from the reform project that we are carrying out, together with my advisers and with the support of all of you".
Vatican spokesman Father Federico Lombardi said last week that the revelations were not all that sensational because the pope's reforms have rendered them out of date.
The papacy of Francis's predecessor, Benedict XVI, was hit by the so-called VatiLeaks scandal over the leaking of embarrassing confidential Church papers.
Benedict's butler, Paolo Gabriele, was convicted over the leaks but was subsequently released from a Vatican cell thanks to a papal pardon.
http://popefrancisnewsapp.com/