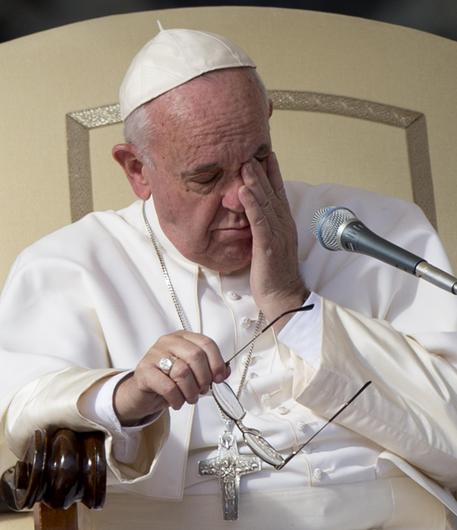 (ANSA) - Vatican City, November 6 - Pope Francis on Friday said that it was sad to see clergymen, including senior Church figures, "attached to money" and material goods. This week the Catholic Church was hit by the so-called VatiLeaks 2 scandal and the related publication of two books documenting allegedly waste and lavish spending by clergymen.
"There are people within the Church who, instead of serving, of thinking of others and laying down foundations, serve themselves from the Church - the climbers, those attached to money," the pope said in his homily during Mass at the Santa Marta residence where he lives inside the Vatican, according to Vatican Radio. "And how many priests, bishops have we seen like this? It's sad to say it, isn't it?".
The books, which feature references to leaked Holy See papers, include reports on the luxurious that apartments some cardinals live in.
Vatican spokesman Father Federico Lombardy said this week that the revelations are not so sensational as the pope's reforms have rendered them out of date.
In an interview with Dutch newspaper Straatnieuws, which Vatican radio picked up Friday, the pope said that it is impossible to talk about the need to tackle poverty while living in luxury if one wants to maintain credibility.
"The Church must speak with truth, and also with testimony," he said. "If a believer speaks about poverty, and leads the life of a pharaoh - this cannot be done".
Francis admitted that the Church in not immune to corruption. "There is always the temptation to corruption in public life - both political and religious," the pope told Straatnieuws. "There is always the danger of corruption". Last weekend two people, Spanish Monsignor Lucio Angel Vallejo Balda and Italian PR expert Francesca Immacolata Chaouqui, were arrested over alleged involvement in the leaks.
Both served on an advisory commission to the pope on financial reform at the Vatican.
http://popefrancisnewsapp.com/