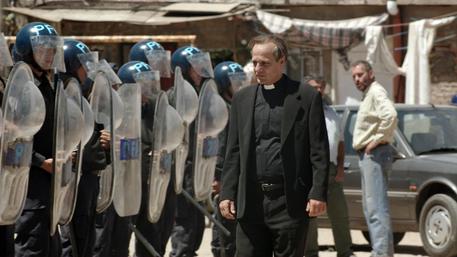 (ANSA) - Rome, November 5 - The first biopic on Pope Francis is about to be released in as many as 700 cinemas amid a new 'Vatileaks' scandal.
The film Chiamatemi Francesco - Call Me Francis - was directed by Daniele Luchetti whose previous work includes Il Portaborse(1991) - The Underling - and La Nostra Vita (2010) - Our Life. The film tells the story of Jorge Bergoglio until March 13, 2013, the day he was elected pontiff.
A preview, which the pope is scheduled to attend, will be held at the Vatican's Paul VI Audience Hall on December 1 prior to its wide release two days later.
Produced by Pietro Valsecchi's TaoDue and distributed by Medusa, it ''will not be a holy picture'', said Luchetti.
Argentine actor Rodrigo De la Serna has the role of the young Bergoglio while Chile's Sergio Hernandez plays the future pope in his later years.
Filmed in Spanish, the production cost 12 million euros and was filmed over 15 weeks in Argentina (Buenos Aires and Cafayate), Germany (Augsburg) and Italy (Rome and Turin) with 3,000 extras, in-depth historic and religious research. It is expected to be distributed worldwide.
Luchetti said the movie is a tale about ''the pope of the people'', ''not necessarily a religious film but on a person for whom religion is a reason for life, hope, strength and who has communicated this to others''.
The movie gives an insight into the path that took Jose Bergoglio, son of a family of Italian immigrants living in Buenos Aires, to lead the Catholic Church.
During his youth, Jorge was a boy like many others, a Peronist, with a girlfriend, friends and chemistry professor, Esther Ballestrino with whom he would remain close all his life.
Everything changed when his calling led him to join, when he was just over 20, the rigorous religious order of the Jesuits.
During Jorge Rafael Videla's dictatorship, Bergoglio was named provincial superior of the Society of Jesus in Argentina, although he was still very young.
This responsibility during very dark times dramatically put the faith and courage of the future pope to test.
In spite of the risks, Jorge directly worked to defend those persecuted by the regime but paid a very high price for it, watching some of his most beloved companions die or ''disappear''.
This experience would have a profound effect on the future pontiff.
When he became archbishop of Buenos Aires, he continued to help residents of the poor suburbs, defending them against abuses of power and promoting their individual and collective growth.
The film ends with the unforgettable night in which, in a packed St Peter's Square, Jorge Bergoglio, wearing white and an iron cross, greeted the world under the name Francis and the straightforward simplicity and deep humanity that have represented his powerful strength from the beginning.
The idea to tell the life story of this pope came to producer Pietro Valsecchi of TaoDue (which made years ago the successful series on Pope John Paul II) a few months after his election, when the historic impact of such a figure became clear.
Mediaset CEO and Vice President Pier Silvio Berlusconi and the company's management immediately supported the project of a film that will be sold worldwide.
The film has an international cast but an Italian director and is dedicated to the first pontiff from the American continent, a figure that unites extremely different areas of the world, languages, cultures, generations and social classes.
http://popefrancisnewsapp.com/