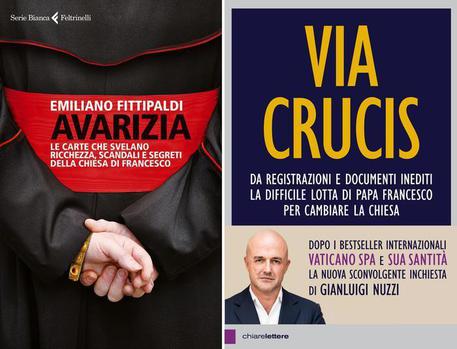 (see related)(ANSA) - Rome, November 4 - The Administration of the Patrimony of the Holy See (APSA) held assets worth 998 million euros in 2013, including an investment portfolio worth over 475 million eurps, according to figures contained in a new book on the Vatican's financial affairs to be published Thursday. Unlike the Institute for the Works of Religion (IOR) - commonly known as the Vatican Bank - APSA's budget "is not part of the public domain", L'Espresso news magazine journalist Emiliano Fittipaldi points out in his new book Avarice, one of two books at the centre of a new Vatican document-leaking scandal dubbed Vatileaks 2. Fittipaldi claims APSA acts like a credit institution and cites budget entries detailing loans to banks to the tune of 162.7 million euros, 24.5 million dollars, 8 million pounds, 4.5 million Swiss francs and 29.2 million yen. The book also exposes alleged money wastage on consultancies for projects that never materialised at Bambin Gesù, a Rome pediatric hospital operating under the auspices of the national health system on an extraterritorial area administered by the Holy See.
Concerns were initially raised by auditors at PricewaterhouseCoopers, Avarice claims. The auditors also reportedly pointed the finger at commercial activities that were allegedly "incoherent" with the original mission of the hospital founded to treat poor children in Rome. These include control of Clinical & Research Services srl and Xellbiogene srl, a biotechnology firm run together with Milan's Catholic University specialising in genetic research.
Founded in 2013, it was wound up two years later. Other concerns were expressed over donations to the hospital and assets building up in accounts at the IOR and APSA.