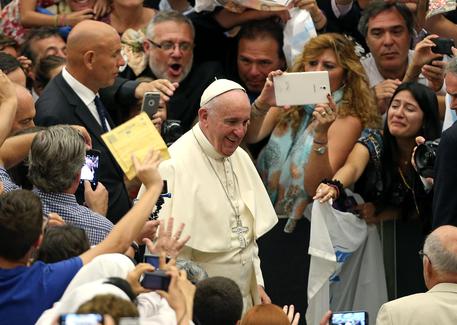 (ANSA) - Vatican City, November 4 - Vatican spokesman Father Federico Lombardi on Wednesday denied media reports that Pope Francis was "disconsolate" after the arrest of two people at the weekend, including a senior prelate, over the leaking of confidential Holy See documents. He also said that, at the moment, no one else was under investigation in the probe apart from Spanish Monsignor Lucio Angel Vallejo Balda and Italian PR expert Francesca Immacolata Chaouqui, both of whom served on the pope's financial reform commission.
The two were detained and interrogated at the weekend following a months-long investigation into the misappropriation and disclosure of classified information to the writers of two upcoming books on the Vatican. Balda remains in a Vatican cell and Chaouqui, who denied the charges, was released after agreeing to cooperate with investigators.
On Wednesday, she wrote on her Facebook page that she has "full faith" in investigators working the case dubbed Vatileaks 2, asking them to "establish the truth" and saying she is at their "complete and total disposal". On her Facebook page Tuesday evening, Chaouqui warned journalists covering the story. "I'm not in the mood to tolerate slander. From anyone. I've already sustained enough," she wrote. Chaouqui also wrote that she was never denied access to the Vatican and that she used "normal procedures" to enter it for meetings or to visit commercial areas for which she was authorised. Advance previews of two books on the Vatican due out later this week and based on confidential documents emerged in the media on Tuesday, drawing further attention to the scandal.
Extracts of Avarice: Documents Revealing Wealth, Scandals and Secrets of Francis Church, by Italian journalist Emiliano Fittipaldi, said that officials in the Vatican's Secretariat for the Economy spent hundreds of thousands of euros on business class flights, clothes made to measure, and expensive furniture.
Fittipaldi wrote that a list of the secretariat's spending included "crazy expenses that reached more than half a million euros after just six months of operations", according to Fittipaldi.
The other book, Merchants in the Temple by Italian journalist Gianluigi Nuzzi, paints a picture of financial mismanagement, greed, secrecy and waste in the Vatican's bureaucracy, according to extracts released to the media on Tuesday.
The Vatican has said it may take legal action against the books. The papacy of Francis's predecessor, Benedict XVI, was hit by the first so-called Vatileaks scandal over the leaking of embarrassing confidential Church papers.
Benedict's butler was convicted over the leaks but was subsequently released from a Vatican cell thanks to a papal pardon. Also on Wednesday, Monsignor Angelo Becciu, substitute for general affairs at the Vatican, said Vatileaks 2 would not stop Pope Francis in his drive to overhaul Vatican finances. "This incident, albeit unpleasant, will certainly not block him," Monsignor Becciu told ANSA. http://popefrancisnewsapp.com/