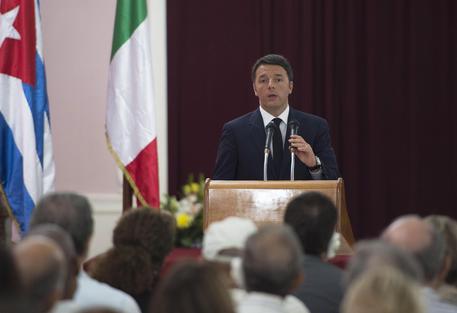 (ANSA) - Rome, October 30 - Premier Matteo Renzi hailed his government's controversial Jobs Act labour reform after Istat reported Friday that Italy's unemployment rate dropped to 11.8% in September, the lowest level since January 2013. The national statistics agency said this was 0.1 of a percentage point down on the previous month and follows drops of 0.1 and 0.5 of a percentage point in August and July respectively. It added that the number of people looking for work had fallen by 264,000, 8.1%, in 12 months. "The Jobs Act has restored credibility at the international level and, above all, it has created opportunities and steady jobs," Renzi said on his Facebook page. The Jobs Act softens the laws on unfair dismissal in a bid to encourage firms to offer steady jobs and gives newly hired staff gradually rising levels of employment protection.
"Now is the time, Italy is getting going again," added Renzi, whose government has embarked on reforms of various sectors, including the civil service and the justice system, and is seeking to overhaul the country's slow, costly political machinery.
"There is still lots to do. But let's not forget where we were".
After three consecutive month-on-month rises, the number of people in employment fell in September, dropping by 0.2% compared to August, Istat said.
The agency added that the number of employed people was 0.9% up with respect to September 2014 though, thanks to an increase of 192,000. The unemployment rate for under-25s who are on the job market dropped, falling to 40.5% in September, down 0.2 of a percentage point on August, Istat said. The national statistics agency said 14,000 fewer 15-to-24-year-olds were looking for work. There was also a fall of 11,000 in the number of young people in work due to a increase in the number of people dropping out of the job market and being considered inactive.
Economy Minister Pier Carlo Padoan, meanwhile, said that GDP growth is exceeding expectations and employment prospects have improved. "The recent results in terms of GDP growth are exceeding expectations, employment is good with better contracts. The recovery is due to domestic demand from families and businesses thanks to the return of confidence," he said.
Italy returned to positive growth in 2015 after years of recession.
The government has said the economy should beat its forecast of a 0.9% rise in GDP this year. Padoan stressed the government's tax breaks to employers for new hires will no gone indefinitely.
"The hiring bonus will be extended this year as well, but it can't last forever," he said.