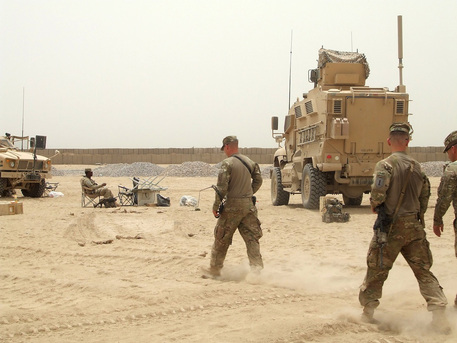 (ANSA) - Rome, October 30 - Italy is to swell its forces in Afghanistan to make up for the return home of a Spanish contingent busy with Force Protection, Defence Undersecretary Domenico Rossi told the House Friday. "The government has decided to remodulate the reentry of some of the contingent" from Afghanistan "and to increase its numerical consistency" as of the end of 2015, "in a way held to be suitable for compensating for the reentry of part of the Spanish contingent that had been dedicated to Force Protection", he said.
On October 19 a NATO commander said Italy, Germany and Turkey are willing to keep their military in Afghanistan "at current levels".
"Many of our partners have already communicated their willingness to remain at current deployment levels," said top NATO Europe commander, General Philip M. Breedlove.
US President Barack Obama said earlier this month he would maintain the current force of 9,800 troops in Afghanistan through most of next year to combat a growing Taliban insurgency, then draw down to 5,500 troops in 2017, at a pace still to be determined after consultation with commanders.
Premier Matteo Renzi indicated that Italy, too, would keep up its commitment to the Taliban-plagued Asian country.
The mission has cost Italy 54 casualties and many wounded over the past decade, and now numbers 750 personnel.
Of these, about 60 are deployed to the Kabul headquarters of the Resolute Support Mission, which took over in an advisory role after the NATO-led International Security Assistance Force (ISAF) ceased combat operations and was disbanded in December 2014.
The rest are deployed in the Western city of Herat.
The Italian mission is made up of logistics, a security task force, a helicopter division called Phoenix, and some 100 military advisors from the Army and Carabinieri military police, whose job it is to train the Afghan military.
It is currently financed with 59 million euros through December 31.
A government decision to extend the mission beyond that date would have to be approved by parliament.