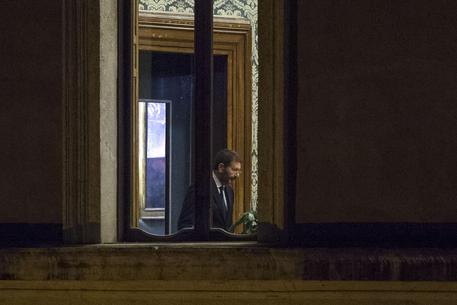 (ANSA) - Rome, October 29 - Amid high drama for the ruling centre-left Democratic Party (PD), outgoing Rome Mayor Ignazio Marino on Thursday withdrew his recent resignation over an expenses scandal and said he wanted to press on.
But the self-awarded reprieve, ahead of Monday's deadline for making the resignation effective or not, looked set to be very short as the PD turned to allies and the opposition to swell the ranks of its councillors and give the majority needed to scotch the defiant first citizen's bid to cling to his post.
Along with the 19 PD councillors, two more from within the ruling coalition plus four from the opposition said they would quit with them by Friday night.
That would make a majority of 25 on the 48-strong city council, effectively ending Marino's chances of sticking it out.
The mayor, however, made it plain he was not going to go silently.
He said he wanted a council debate "in the sacred place of democracy...with my majority to illustrate what has been done: the positive things, the mistakes and the vision for the future". Marino insisted that he wanted "an open, frank and transparent discussion in the Julius Caesar Room," where the city council convenes.
The mayor went into what could well be his last executive council meeting Thursday night with three councillors missing.
He appeared likely try to dig in until a cherished project, completing the transformation of the Roman Forum into a pedestrian zone, was approved by the council - although his wishes could be thwarted.
The PD councillors agreed their mass resignations earlier in the day in a meeting with Rome PD commissioner Matteo Orfini, who has the full confidence of PD leader and Premier Matteo Renzi in handling the affair. Despite losing thr support of Renzi and the PD, Marino had vowed "not to disappoint" supporters, quoting Che Guevara's saying "We are realists, we want the impossible" and also likening himself to Chilean leftist leader Salvador Allende.
The PD said the expenses row was just the last in a long series of furores that mean the mayor could not regain its trust.
The PD pulled the plug after months of sometimes grudging support through woes including the 'Capital Mafia' case, an illegally parked car, the glitzy funeral of a mafia boss and Pope Francis's public disowning of Marino after he claimed to have been invited to an event in Philadelphia.
The city of Rome is standing as civil plaintiff in the Capital Mafia trial, starting November 5, involving allegations that an organised crime group muscled in on council contracts worth millions including work with migrants and Roma.
Most of the Capital Mafia cases began under Marino's rightwing predecessor Gianni Alemanno.
Marino has claimed credit for unearthing much of the graft.
But aside from the rows that have undermined his position, Marino's record on trying to solve Rome's many woes, from potholes to traffic to graffiti and general urban neglect that has won international attention, has been spotty at best - and he has happened to be on holiday or otherwise absent while many of the controversies were peaking.
However, his supporters saw him as a clean politician who has tried to tackle problems linked to powerful vested interests, and even his opponents have recognised the basic honesty of the former liver transplant surgeon.
But the end of Marino's bid to stay afloat was overshadowed by comments from Italian anti-corruption czar Raffaele Cantone, who said Wednesday that Milan was Italy's capital of morality and that Rome does not have graft antibodies. Marino countered by saying "Rome has antibodies and they are working".
He also denied reports he was holding out in order to win a demonstration of gratitude or another important position from the PD.
"Here the issue is not Ignazio Marino but Rome," he said. "Ignazio Marino does not have anything to ask or negotiate for with anyone".