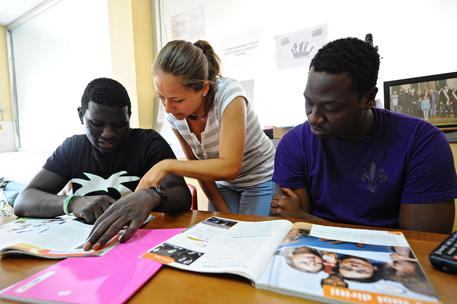 (ANSA) - Rome, October 29 - The number of Italians living abroad grew more than the number of foreigners living in Italy in 2014, according to the 2015 statistical report in immigration presented Thursday.
The Italians overseas population grew by 155,000 last year, while the immigrant population in Italy grew by 92,000.
By year's end both communities numbered over 5 million people.
The report showed that Italy's immigrant population is growing progressively but at a slower pace than in the past. It also highlighted a net positive balance between public expenditure on immigrants and their contribution to state coffers and an improvement in immigrant crime statistics.
ARRIVALS. Over 170,000 asylum seekers and economic migrants arrived in Italy in 2014. Others arrived for family reunifications or other reasons by regular channels. Last year police intercepted 30,906 foreigners without a regular permit of stay. Of these, 15,725 (50.9%) were repatriated.
ASYLUM SEEKERS. Requests for asylum totalled 64,625 in 2014 and involved people prevalently from sub-Saharan Africa but also from Asia and Europe (Ukraine). The system for receiving and accommodating asylum seekers and refugees in Italy remains fragmented, with four first aid and reception centres (CPSA), ten reception centres for asylum seekers (CARA), the protection service for asylum seekers and refugees (SPRAR) network and temporary reception centres (CAS). The number of people accommodated in SPRAR facilities rose from 7,823 in 2012 to 22,961 in 2014; in June 2015 only 25% of the 78,000 asylum seekers present in Italy lived in these structures, while 62% lived in temporary reception centres. REGULAR IMMIGRANTS. Foreign residents account for 8.2% of the Italian population. This is above the European average of 6.2%. Non-EU citizens number 3.5 million and EU citizens 1.5 million. Romanians are the largest group by nationality. Rome is the province with the largest immigrant population at over 520,000 foreign residents at the end of 2014 - 10.4% of the nationwide total. The number has more than doubled in 10 years. STABLE. Immigrants show a strong tendency to settle permanently. 129,887 foreigners obtained Italian citizenship in 2014, up 29% over the previous year. Of the 502,596 children born during the course of 2014, 75,067 (14.9%) had two foreign parents. Foreign children accounted for 9.2% of school enrolments for the 2014/2015 school year. Foreigners account for 4.2% of the university population and 3.3% of graduates. EMPLOYMENT. Roughly 2.3 million foreigners were in work in 2014, 10% of the total. 154,686 permits of stay were not renewed on expiry as a result of the economic crisis (up 6.2% on 2013).
The report estimates that tax revenue and social security contributions deriving from immigrant labour amounted to 16.6 billion euros in 2013. This compares to an estimated expenditure by the state of 13.5 billion euros in the same year on foreigners'' behalf. CRIMINALITY. Police reports against foreigners fell by 6.2 per cent in the period 2013-2014. Over the same period reports against Italians rose by 28%.