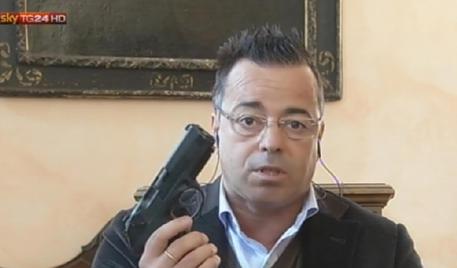 (ANSA) - Rome, October 23 - An MEP from the rightwing anti-immigrant Northern League party sparked an outcry Friday when he brandished a gun during a TV interview.
Gianluca Buonanno said he did it to show support for a pensioner who may face homicide charges after he shot an alleged intruder dead.
The interviewer on TG24 news asked him to put the gun away but he waved it around again, saying it didn't have a magazine, as other journalists and MPs called for the EP to discipline him.
"I don't have a gun permit and I don't like them," he told ANSA later. "It was just a carcass of a weapon...I don't understand these protests," he said.