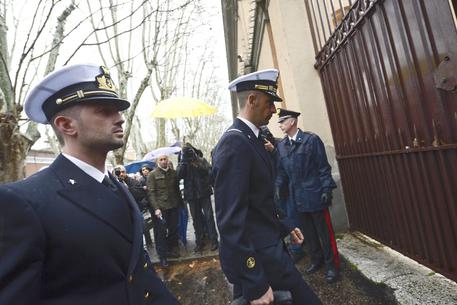 (ANSA) - Venice, October 22 - Defence Minister Roberta Pinotti said on Thursday that Italy was determined to pursue efforts to resolve a diplomatic spat with India over two Italian marines facing possible charges there in connection with the deaths of two fishermen in 2012.
Pinotti said a ruling by the International Tribunal for the Law of the Sea in Hamburg in August stating that India has no jurisdiction over the case was "a very important step".
"We are therefore continuing to follow the path of international resolution," said Pinotti.
The Indian supreme court has suspended all judicial proceedings regarding the two Italian marines in compliance with the Hamburg court's ruling. It is due to reassess the situation in January.
Massimiliano Latorre and Salvatore Girone are accused of killing fishermen Valentine (aka Gelastine) and Ajesh Binki after allegedly mistaking them for pirates and opening fire on their fishing trawler while guarding the privately owned Italian-flagged oil-tanker MT Enrica Lexie off the coast of Kerala on February 15, 2012.
India granted Latorre leave to return to Italy last year after he suffered a stroke.