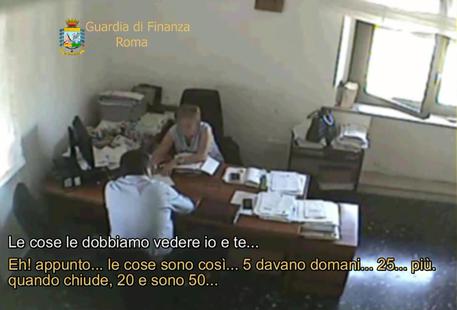 (ANSA) - Rome, October 22 - Former infrastructure ministry undersecretary Luigi Meduri was among several people arrested on Thursday in relation to a corruption probe centred on Italian highways company ANAS. The case led Rome Prosecutor Luigi Pignatone to say the daily stream of graft was "depressing", but national anti-corruption czar Raffaele Cantone to say he was happy that more "tumoral growths" were emerging, but a new "culture" was sorely needed.
Premier Matteo Renzi said anyone caught stealing from public firms should be sacked "without any form of forgiveness".
A number of ANAS managers and officials have been arrested including the alleged ringleader, so-called 'Dark Lady' Antonella Accroglianò.
Among other things, she allegedly steered work towards firms linked to Italy's richest and most powerful mafia, the Calabria-based 'Ndrangheta.
The owners of several companies that won mayor public works contracts are under investigation too as well as some lawyers.
The probe is looking into alleged corruption and vote buying, among other crimes. Meduri, a member of Premier Matteo Renzi's centre-left Democratic Party (PD), was a "shady middleman" and the political mediator for Accroglianò, police said.
Meduri was infrastructure ministry undersecretary from 2006 to 2008.
He was also governor of the southern region of Calabria from January 1999 to April 2000.
The PD suspended Meduri from the party. Among the other executives arrested are Francesco Domenico Costanzo and Concetto Bosco Lo Giudice, whose Tecnis company won public works contracts worth 800 million euros a year.
In reactions, Pignatone, the Rome chief prosecutor, said the probe gave "a depressing sensation of the daily nature of corruption".
"The main person under investigation goes to the office every day but her main job is to manage the corruption flow and to treat badly those who get behind on their payments," he said, referring to Accroglianò.
Corruption, Pignatone said, "is viewed as quite a normal thing".
Cantone hailed the arrests and called for a "new culture" to help stem such cases.
"I'm not worried, but happy...We're seeing a whole series of tumoral growths coming out.
"Now, however, we must put a whole series of patches in place to make sure these cases don't continually recur".
Cantone was speaking at a conference on the "culture of whistleblowing".
The president of ANAS called for it to be "cleaned up".
"I trust in the help of prosecutors, I hope that the action of cleaning up happens as soon as possible, the sooner the better for me and for ANAS, said Gianni Vittorio Armani, adding that "the greater part of ANAS is honest and I think it can get out of the tunnel".
He said all the incriminated managers would be "dismissed, without settlements".
Renzi said that "(I have) full respect for those probed but on our part there is the will to clean (things) up: whoever, in a public firm, is found stealing not only must pay but must also be fired without any form of forgiveness".