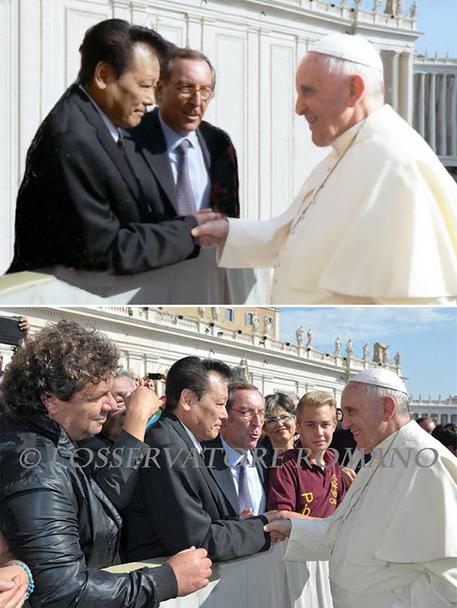 (ANSA) - Tokyo, October 22 - Dr Takanori Fukushima, the Japanese specialist who reportedly diagnosed Pope Francis as having a small, treatable brain tumour according to the Qutodinao Nazionale (QN) daily, has removed from his Internet site (dr-fukushima.com) two posts regarding visits he said he made to the Vatican in October 2014 and January 2015.
In the first there were two retouched photos of a meeting with the pope. The Vatican has vehemently denied the report that the pope has a brain tumour, stressing he is in good health, and rebutted the report that he was examined by Fukushima or any other Japanese doctors. On Wednesday a doctor who works with Fukushima told ANSA that his visits to the Vatican this year and last were not treatment-related.
"Takanori Fukushima's two visits to the Vatican did not have clinical aims," neurosurgeon Gaetano Liberti told ANSA. "If that was not the case, I would certainly have known about it because I have been a close collaborator of his for 22 years". Vatican daily L'Osservatore Romano said Wednesday that the "moment chosen" to raise this "hue and cry" showed that there was "manipulative intent" behind it. The Vatican is currently hosting a synod on the family that is seen as highly important for the Catholic Church.
Cardinal Walter Kasper echoed those sentiments in interviews published Thursday in daily newspapers Corriere della Sera and La Repubblica.
"It's just a clumsy attempt to condition the work of the synod," Kasper said.
"It is like what happened a few days ago with the publication of a private letter sent to the pope by 13 cardinals, about which many doubts have emerged.
"Now they raise the alarm about the health of Pope Francis.
"But the Holy Father and the synod fathers will not let themselves be influenced by anyone". http://popefrancisnewsapp.com/