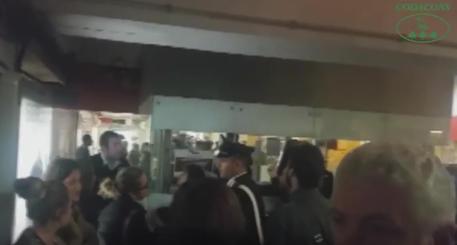 (ANSA) - Rome, October 22 - The chief executive of Rome's transport company ATAC on Thursday refused to accept blame for the latest disruption of the Italian capital's underground system, and said the firm urgently needed investments from authorities.
Rome's Metro B line was temporarily suspended on Thursday after an overhead cable at Cavour station in the city centre collapsed. The latest problem comes just a week after a train jumped off the tracks and hit a wall near Anagnina station on the Metro A line. ATAC CEO Danilo Broggi, who is resigning, said at a news conference that the firm had sent two letters to local authorities highlighting the risks posed to Cavour station by recent heavy rainfall.
"We were therefore victims and not perpetrators in this situation," he said.
He said the company has told authorities repeatedly that it desperately needs about 150 million euros of investments to be able to carry out its services efficiently. He pointed out that sum was just for urgent work and the system really needed much more funds.
On Thursday commuters reacted angrily to the latest disruption, invading the busy Via Monti Tiburtini and taking local bus stops by storm.
Rome city authorities responded by opening traffic-free zones to all vehicles in an attempt to alleviate the chaos.
The state of Rome's transport system is of particular concern in light of the upcoming Special Jubilee of Mercy, which opens on December 8 and is expected to draw millions of pilgrims to Rome.
Earlier outgoing Rome transport councillor Stefano Esposito took aim at ATAC top brass, saying they should concentrate on making the service work rather than holding news conferences. Broggi said on Thursday that regional authorities owed the company at least 680 million euros, and he blamed the strained situation on problems between political institutions.
He said he had been hired by Rome city authorities to prevent ATAC from going bankrupt and he had achieved that. He also said that during his time at the helm of the company he had increased the number of work and services contracts being offered through competitive tender.