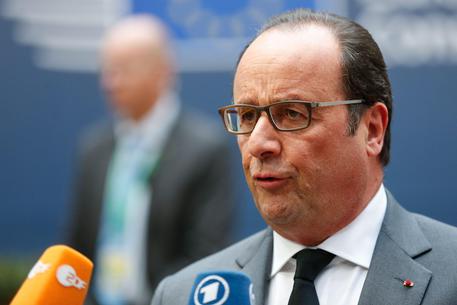 (ANSA) - Brussels, October 15 - French President Francois Hollande on Thursday said that support for countries bearing the brunt of the Syrian refugee crisis such as Lebanon, Jordan and Turkey was crucial as he arrived at a European Union summit on migration.
"It's important to help them," Hollande said. Speaking of Turkey, he said "clear rules are needed so that it can do its part, not just to look after refugees," but also to "prevent flows of people that could lead to further tragedies," he said.
Hollande also said the creation of "hotspots" or teams of experts who can quickly identify refugees in need of international protection, was absolutely essential.
"It's important that in Italy and Greece we can have these centres," he said. "And I am also paying a lot of attention to what is happening in the Balkans where there are refugees that are not being received," he said.
EU leaders are gathering in Brussels for the migration summit, the fourth so far this year, which aims to reach a deal with Turkey on handling the crisis that has brought record numbers of refugees to Europe's shores.