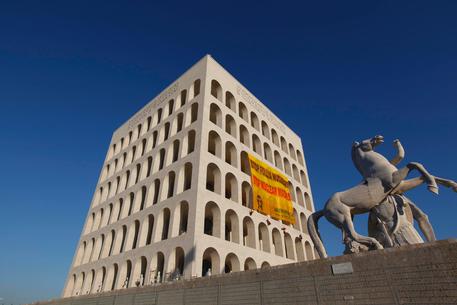 (ANSA) - Rome, October 15 - Italian luxury fashion house Fendi is set to unveil its new headquarters at Rome's Palazzo della Civiltà Italiana, sources said Thursday.
The inauguration ceremony on October 22 will feature an exhibition on the history of the building, an emblem of Italian Fascist architecture inspired by the Colosseum.
The exhibition, which the public can visit from October 23 until March 7, is part of the fashion label's efforts to support and promote the Italian capital's historic and cultural heritage.
The fashion house has recently funded the restoration of Rome's Trevi fountain.
The Palazzo della Civiltà (Palace of Civilization), also known as the Square Colosseum, was completed in 1943 and forms part of the EUR district of the city, which Benito Mussolini planned as the site of a world's fair to celebrate 20 years of Fascism. The fair, scheduled for 1942, never took place due to the outbreak of World War Two.
Fendi's exhibition, entitled A New Rome: the EUR and the Palazzo della Civiltà Italiana will be held in a part of the building that the company has designated as a showroom for public exhibitions and shows.
Drawings and sketches of the major architects of the 20th century will illustrate developments in the new era of the Palazzo della Civiltà Italiana, accompanied by pictures by prominent photographers of the time including Franco Fontana and Karl Lagerfield.
Extracts from films by seminal Italian filmmakers Bernardo Bertolucci, Vittorio De Sica and Federico Fellini will also be screened.
New permanent nighttime lighting of the building designed by artist Mario Nanni will be unveiled at the inauguration ceremony. Light will illuminate the building with growing intensity to symbolise its new lease on life.
In July 2013, Fendi announced a 15-year deal to rent Palazzo della Civiltà Italiana from Eur S.p.A. The deal included plans to move the fashion label's headquarters to the site and to create a large exhibition area.