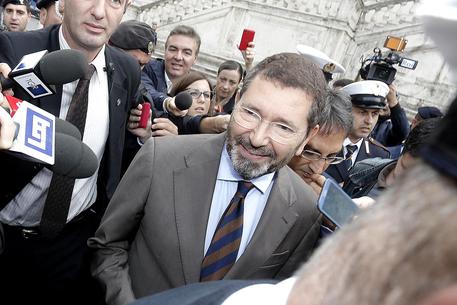 (ANSA) - Rome, October 9 - Ignazio Marino returned to work on Friday, the day after he quit as Rome mayor over an expenses scandal in the latest in a string of furores to dog his two-year-old administration. Marino, who is from Premier Matteo Renzi's Democratic Party (PD), resigned Thursday amid huge pressure from his own party in the wake of opposition allegations he spent 20,000 euros on non-official dinners on the taxpayer's dime.
The rightwing and anti-establishment opposition has depicted the outgoing mayor, a surgeon by profession, as incompetent, but his supporters say the expenses scandal was cooked up by enemies whose vested interests he had touched. Among other things, Marino tackled corruption and nepotism in the city's transport and refugee agencies, incensed many by extending pedestrian zones in Rome's historic center and also incurred the wrath of the right by taking strong stands in favor of gay marriage and the integration of immigrants. "If those (expense) receipts had not arrived, sooner or later they would have said that my socks had holes in them, or they would have planted cocaine in my pocket," the outgoing mayor said in an interview published in Friday's edition of La Stampa.
Later on Friday, the small leftist Left Ecology and Freedom (SEL) party extended an olive branch to Marino, who was elected in 2013 with 63.9% of the vote on a joint PD-SEL ticket.
"We want to go ahead with the electoral program," SEL city council whip Gianluca Peciola wrote on Facebook. "Asking the mayor for a change of direction, for the truth, and for respect of the mandate is the right thing to do. Otherwise he can confirm his resignation". Hopes of a possible renewed mandate for Marino were dashed later in the day when the PD made known it is not interested in renewing its backing.
Also on Friday, PD MP Roberto Speranza said the party should hold primaries to choose a new candidate for mayor of the nation's capital. "A deep rift between the city and the PD has taken place in Rome," said Speranza, who quit earlier this year as Lower House PD whip in disagreement with the party line and now belongs to a dissenting leftwing minority within it. "In my view primaries are inevitable to try to rebuild.
Decisions made from above can't suffice. It is key we start again, from our people".
By law, the mayor has 20 days from when he officially hands in his resignation to withdraw or confirm it. The mayor's office said earlier that Marino will formally hand in his resignation on Monday.
He will continue to run the city until a commissioner is nominated to replace him ahead of municipal elections next year.