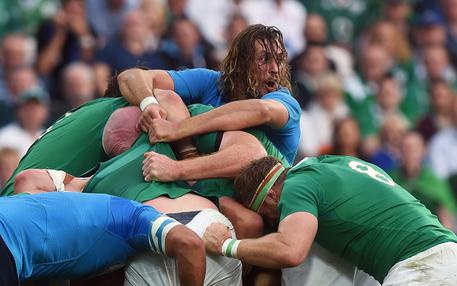 (ANSA) - Rome, October 5 - Italy salvaged some pride but their dream of reaching the Rugby World Cup finals for the first time ever are over after Sunday's 16-9 defeat to Ireland.
The Azzurri were much improved with the return of captain Sergio Parisse, even though he was not fully match fit after recovering from a badly bruised leg, following a 32-10 defeat to France in their opener and a laboured 23-18 win over Canada.
They pushed the much-fancied Irish hard, giving them trouble in the scrum and serving up a sterling defensive display.
But their inability to cross the tryline, with lock Josh Furno tackled just short early in the second half, cost them. "It's a missed opportunity," Italy coach Jacques Brunel told a press conference.
"We have the ability to challenge teams. We can do better but we have shown the qualities we have".
Italy must now beat Romania in their final Pool D match in Exeter on Sunday to ensure they finish third in the group and qualify directly for the 2019 World Cup.