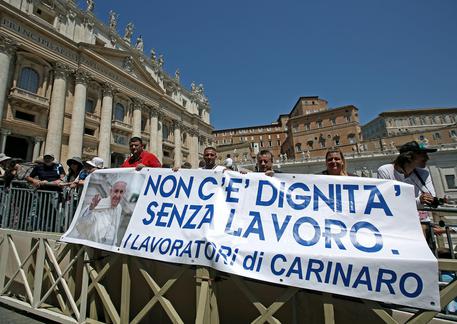 (ANSA) - Rome, September 30 - Premier Matteo Renzi was jubilant Wednesday as Italy's unemployment rate fell below 12% for the first time in two and a half years, saying it was proof that his flagship labour-market reform, the Jobs Act, was working.
Renzi hailed the jobless rate falling to 11.9% in August - the lowest it has been since February 2013 - as the fruit of the controversial Jobs Act. "The Istat data certify that the Jobs Act is working," he said. "We have recovered 325,000 jobs in a year, August on August. Unemployment that was nearly 14% at the start of the government's action is now below 12%. The reforms are bearing fruit, Italy is restarting," he said. "Full steam ahead now. There's still a lot to do and we can do it together, with the confidence of people who know that we belong to a great country, strong and proud. Long live Italy".
Renzi went to say that "in the first year and a half of government the priority was to rescue manufacturing industry and employment to go from minus points to plus points in all economic indicators. "This first phase aimed to take Italy out of the quicksand and now we can say: mission accomplished".
Italy's unemployment rate fell for the second consecutive month in August, when it dropped to 11.9%, Istat said. This was 0.1 of a percentage point down on July and 0.7 of a percentage point lower than in August 2014. The national statistics agency said unemployment had fallen 5% in 12 months, with 162,000 people fewer looking for work.
The unemployment rate for Italians under 25 who are actively part of the labour market stood at 40.7% in August, an increase of 0.3 of a percentage point on July, Istat said. However, the figure was 2.3 percentage points lower than in August 2014, the national statistics agency said. Istat said 631,000 under 25s were unemployed in August, a rise of 13,000 (2.1%) on the previous month. The number of employed 15-24-year-olds also increased though, rising by 7,000 (0.8%) on July.
Renzi has long argued that his Jobs Act, passed early this year, was making the difference for the slow-moving Italian labour market.
The reforms make it easier for employers to fire newly hired workers and introduce a new form of labour contract with gradually increasing levels of protection.
For new hires, a totemic article in the 1970s workers' statute on court-ordered reinstatement after unfair dismissal was watered down, a move that had eluded previous governments because of stiff leftwing and union resistance.
The measures came into force on March 6 and Renzi has repeatedly argued the reforms would encourage firms to hire new staff and help combat unemployment.
The reforms aim to improve the quality of labour contracts, replacing a plethora of temporary and other low-paying, no-benefits contracts that have proliferated in Italy in recent years, meaning a regular full-time job has been increasingly hard to find.
The reforms also introduced controversial 'remote controls' on workers via cellphones and tablets and extended parental leave.