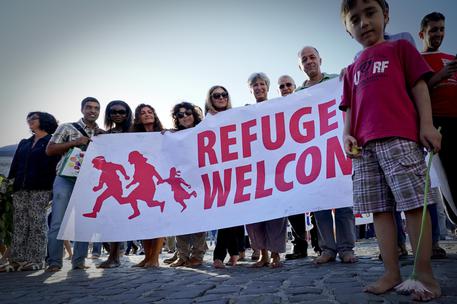 (ANSA) - Rome, September 11 - More barefoot marches took place in several Italian cities on Friday calling for refugees to be welcomed in Europe.
Thousands of people attended barefoot protests in Venice, Rome, Mantua and Naples Friday after similar demonstrations on other parts of the country in recent days.
A red carpet event at the Venice Film Festival Friday was set to feature barefoot marchers walking from the canal city's Lido to protest the plight of Syrian refugees. Among those expected to arrive barefoot at the Venice festival red carpet were Susanna Camusso, head of Italy's largest union CGIL, left-wing politician Nikki Vendola and director Marco Bellocchio.
Some 2,000 people took part in the Rome event.
In Mantua, meanwhile, writers and intellectuals from the city's literary festival were taking part in another barefoot march, including African author Noo Saro-Wiwa, organised crime historian Enzo Ciconte, and engineer Gianni Silvestrini as well as photographer Mario Boccia.
"I want to show solidarity with the refugees because it seems to me there is not enough empathy with them," said Noo Saro-Wiwa, author of 'In search of Transworldland', in which he recounts his return to Nigeria as an adult. His book recently was published in Italy.
"We have to be able to guarantee these people a safe place to have refuge until the situation in Syria improves," he said.
In Naples, a barefoot march left the central Piazza Plebiscito in a protest organised by Amnesty International supported by 50 civil society groups with some 1000 people taking off their shoes and taking part.
"Bare feet are a very strong symbol to make you feel nearer as possible to migrants and the discomfort they can have undergone during their journeys," said Serena Salzano, a young Amnesty volunteer.
"It is a bit sad seeing all these people who only felt involved in the tragedy after seeing the photo of the (dead) child on the beach, but since then something has changed in public opinion".
The International Organization for Migration (IOM) said Friday that 432,761 migrants have arrived in Italy, Greece, Spain and Malta so far this year after crossing the Mediterranean. It said 2,748 people died attempting the crossing, above all in the Channel of Sicily.
The agency said that 309,356 migrants arrived in Greece between January 1 and September 10, while 121,139 landed in Italy in the same period, 2,166 in Spain and 100 in Malta.
European Union sources, meanwhile, said Friday 'Phase Two' of the EU's naval mission in the Mediterranean, featuring the active hunting down and arrest of human traffickers and the confiscation or destruction of boats, should start "by early October at the latest". On Friday turmoil continued in many parts of Europe due to the refugee emergency.
An Italian van driver was stopped with 33 Syrians aboard heading for Germany near Budapest Friday, police said. The man, 53, from Como, driving a red Fiat Ducato, was stopped near Lake Balaton. There were two women among the refugees in the back. The Italian embassy is investigating the matter. The man reportedly said he had picked up the refugees after he saw them shivering in the cold. He has been accused of human trafficking.