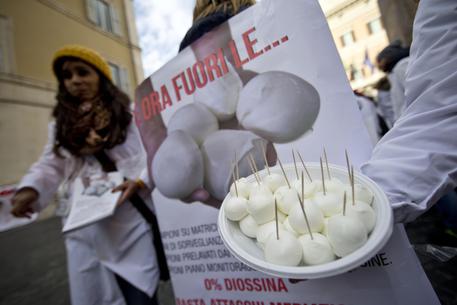 (ANSA) - Salerno, September 7 - Italy's farmers' union called Monday for more protection for quintessentially Italian foodstuffs, citing the examples of mozzarella being imported to Italy from Poland and Dutch salad going on sale in the lettuce-growing capital of Salerno province.
The mozzarella was made in a Polish firm for a company in the German-speaking region of Bolzano and was due to be sent to Florence for marketing as "fresh mozzarella," said Vittorio Sangiorgio, president of the Coldiretti farmers' union in Salerno province, who led a delegation of Salerno farmers protesting at the Brenner frontier with Germany.
An entire lorryload of Dutch salad was due to cross the Brenner frontier destined for Piana del Sele as succulent produce of Salerno, he said.
"This is a paradoxical situation," he said, "salad produced abroad arrives to be sold as from Salerno in the area of Europe with the biggest salad production".
"After wine, extra virgin oil and San Marzano tomatos we add another product to the basket of our excellent specialities under siege by illegal trafficking".
"We are at the Brenner to reaffirm the necessity of defending the sector from false Made in Italy products until we obtain the indicatin of the origin of all food products, which often come into Italy already branded as Made in Italy".