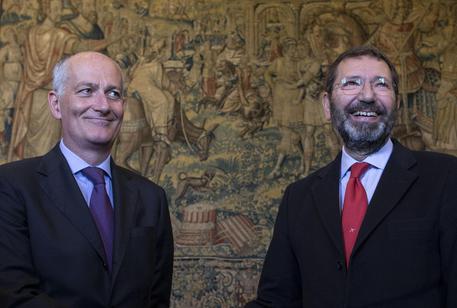 (ANSA) - Rome, August 31 - Rome Mayor Ignazio Marino will meet with Rome Prefect Franco Gabrielli on Friday over critical planning for the Catholic Church's extraordinary Jubilee of Mercy beginning December 8, upon his return from his summer holiday in the United States.
Marino will officially return to work on Thursday for a meeting of his cabinet.
Government undersecretary Claudio De Vincenti and Rome Deputy Mayor Marco Causi will meet this week with representatives of the economy ministry to discuss funding for Jubilee management.
In addition to the 50 million already allocated by the government, another 30 million could be assigned from the debt management commissioner for Rome.
The prefect's office will coordinate the inter-institutional Jubilee department, as recommended by Interior Minister Angelino Alfano, and Causi has already requested a preliminary preparatory meeting with Gabrielli for Tuesday.
In that meeting, the city will introduce its Jubilee "technical team," the delegation that will participate in planning meetings with the government.
Also on Tuesday, Gabrielli is scheduled to meet with Lazio Regional Governor Nicola Zingaretti to discuss emergency planning logistics for the city's historic centre, as well as an emergency response phone number.
The city is also addressing the topic of possible corruption during Jubilee projects, especially in light of the recent corruption scandals that have rocked the administration.
Rome's Councillor for Legality, Alfonso Sabella, said that he has already contacted Raffaele Cantone, president of Italy's national anti-corruption authority ANAC, and will meet with him next week "to talk about the Jubilee, and coordinate the inspections that we've arranged together with those of ANAC".
"I think that, in so doing, Rome will be able to actually have even more stringent controls that those of Expo," Sabella said.