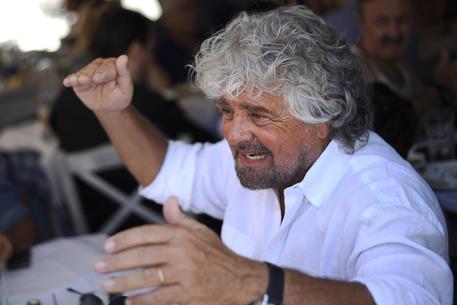 (ANSA) - Rome, August 28 - Comedian-turned-politician Beppe Grillo, whose anti-establishment 5-Star Movement (M5S) is Italy's second-largest party, on Friday called for a Merkel Plan for Africa so that refugees will stop coming to Europe.
Grillo's plan, to be modeled after the Marshall Plan with which the United States helped rebuild Europe after World War II, would call for each nation to contribute a quota of its GDP to massive investment in Africa.
"Tanks, barbed wire and sinking ships won't stop the ongoing biblical migration," Grillo wrote on his popular blog.
"It is mandatory we give these people better life opportunities in their own countries with targeted investments (health care, infrastructure, delocalization of production plants) with a new Marshall Plan we could update to a Merkel Plan".
Grillo also called for an end to the arms industry as a way to stopping wars and the massive displacement of people.