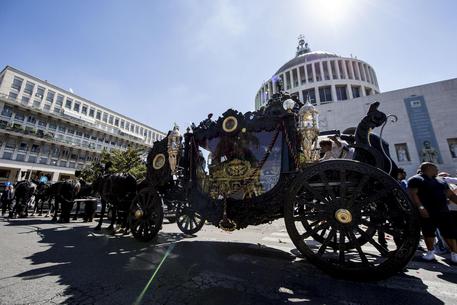 (ANSA) - Rome, August 21 - A representative of Rome's Vicariate on Friday said they would have suggested a "more discreet" funeral than the Godfather-style event staged for Rome Mob boss Vittorio Casamonica, had they known it was going to turn into such a "show" on Thursday.
"I strongly contest this way of exploiting death...this type of spectacular funeral," the bishop for eastern Rome, Msgr Giuseppe Marciante, told Vatican Radio.
"None of us knew (about it)," he went on.
"Certainly, if we had known that there was this spectacle behind this funeral we would have suggested the funeral should be held in a more discreet way," Msgr Marciante said.