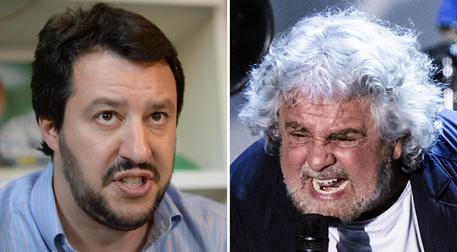 (ANSA) - Rome, August 17 - Anti-immigrant Northern League party leader Matteo Salvini on Monday called on the anti-establishment 5-Star Movement (M5S) led by comedian-turned-politician Beppe Grillo to join his party in a planned general strike "to topple the government". "Bring the grillini out on the streets with us," he told La Repubblica and Il Tempo dailies in an interview. Grillo's followers are colloquially referred to in Italy as "grillini", or "little Grillos". Salvini at the weekend called for a three-day general strike November 6-8 against the center-left government's immigration policy, which he called a form of "attempted genocide" against Italians. The rightwing leader also blasted the Catholic Church, saying "a bishop acts like a bishop and doesn't act like a pain in the a*** towards mayors". His remarks came after Avvenire, the daily newspaper of Italian Bishops Conference CEI, last week took aim at the Northern League's vociferous opposition to rescuing asylum seekers off unseaworthy boats in the Mediterranean, which the Coast Guard does on an almost daily basis. This came after Salvini said CEI Secretary-General Monsignor Nunzio Galantino was being a "pain in the neck" after he blasted politicians who fuelled anti-immigrant sentiment, calling them "cheap peddlers willing to say extraordinarily inane things just to get a vote". He added that comments by League politicians such as Salvini and Governor Luca Zaia of Veneto amount to "boastful tavern talk" that could degenerate into violence against newcomers. Salvini, who leads the country's second-largest party, also said in the interviews that the strike will target "products that finance the State", such as cigarettes and gambling.
His proposal met with derision on some fronts.
"Salvini calls on Grillo to help topple the Renzi government?" PD Senator Stefano Pedica said. "Populist alchemy should be experimented on Mars.... Salvini plus Grillo would be a lethal cocktail, which the country does not need". The Senator went on to call such a hypothetical alliance "an Armata Brancaleone" - an Italian expression for an ineffective, ill-assorted motley crew. L'Armata Brancaleone (known in English-speaking countries as For Love and Gold or The Incredible Army of Brancaleone) is a 1966 comedy directed by Mario Monicelli.
Silvio Berlusconi's center-right Forza Italia (FI) party said the proposed strike is "mission impossible". "To Matteo Salvini: stopping Italy? Mission impossible! Italy is already at a standstill," tweeted FI Lower House whip Renato Brunetta. FI and the League were coalition partners in three previous Berlusconi administrations.
An MP from the small centrist Civic Choice (SC) party said opening European markets to African products would go a long way towards solving the ongoing migrant crisis. "Do we really want to help Africa lift itself out of poverty?" MP Gianfranco Librandi said in a statement. "We certainly don't need another one of Salvini's trips to Nigeria...but rather a grand European strategy to open Western markets to African trade, especially agricultural products and raw materials".
Salvini announced in May that he would travel to Nigeria in June to convince Africans to stop migrating to Europe. "The government has already spent too much" on rescuing migrants and resettling them, he said at the time. "First our people, then them". That trip has been postponed, sources said.