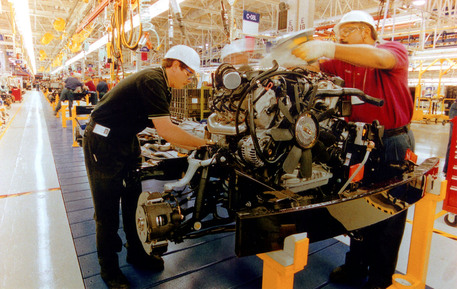 (ANSA) - Rome, August 14 - Italy's gross domestic product (GDP) increased 0.2% in the second quarter of 2015 compared to the first three months of the year, Istat said on Friday. The national statistics agency added that GDP was 0.5% higher in the second quarter than in the same period last year, according to its seasonally adjusted preliminary estimate. Italy has returned to positive growth this year after a long, painful recession.
However, the 0.2% growth rate for the second quarter was below the 0.3% registered for the first three months of the year.
Nevertheless, the government said the data was encouraging.
Economy ministry sources said Friday that the 0.2% rise was "as expected", adding that this confirmed that "the government's financial programme is based on reliable forecasts". The sources added that "after 13 consecutive quarters of quarter-on-quarter falls, now we have two quarters of growth.
"The country can and must do better. Structural reforms and economy policy will help it accelerate". The optimistic interpretation of the figures was echoed by Filippo Taddei, the economic pointman for Premier Matteo Renzi's centre-left Democratic Party (PD).
"Italy is officially out of recession after 13 consecutive quarters of negative GDP (growth) and that is not to be taken for granted," Taddei said.
He added that the data showed the growth was led by domestic, not external, demand.
Many analysts would read that as a positive factor, suggesting that growth and confidence are rising at home, which in turn fuels greater spending and demand.
In contrast Giorgio Squinzi, the head of industrial employers' confederation Confindustria, said Istat's GDP data showed that Italy has not yet embarked on a real recovery after years of negative growth. "It's what we expected," Squinzi told Affaritaliani.it regarding the 0.2% GDP rise in the second quarter.
"Unfortunately, it is confirmation that this isn't a real recovery". Opposition parties jumped on the data as evidence that the government's economic policies were not working.
"(The goverment's 2015 growth forecast of) 0.7% is at risk," Renato Brunetta, the House whip for Silvio Berlusconi's centre-right Forza Italia (FI), said via his Twitter account.
"Goodbye GDP dreams. Poor (Premier Matteo) Renzi. Poor Italy".