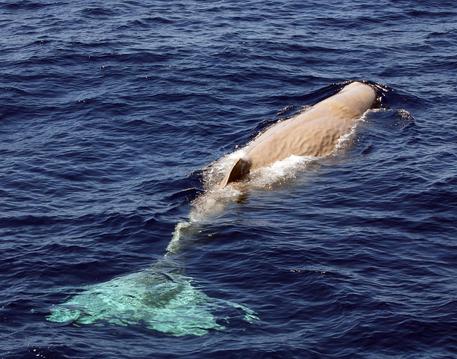 (ANSA) - Sassari, August 5 - Researchers from the University of Sassari and tourists on a whale-watching excursion were treated this week to a rare sighting of a white sperm whale in Caprera Canyon, near Sardinia's northeastern coast. The albino whale - whom researchers have since dubbed Moby Dick after the title character from the eponymous Herman Melville novel - was first spotted two days ago.
Experts said the sighting is an exceptional event, coming nine years since the first documented sighting in the Mediterranean off Tavolara Island, a protected marine area.
Observation of the whale lasted 15 minutes, allowing researchers to document its behavior and take photos.
Northeastern Sardinia is a known "hot spot" for whales, with over 600 documented sightings of eight different cetacean species known to inhabit the western Mediterranean.
In 2012 another rare sighting took place in the same area with the first documented sighting of a free-ranging Sowerby's beaked whale, more commonly seen in deep waters between Norway and the UK.