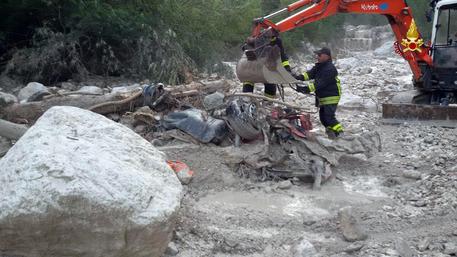 (ANSA) - Rome, August 5 - A teenage girl was among at least three people who were killed when heavy rain caused landslides between the town of San Vito di Cadore and Cortina d'Ampezzo in northern Italy's Veneto region, local officials said Wednesday. "She's a girl aged about 14," San Vito di Cadore deputy mayor, Andrea Fiori, told ANSA referring to the youngest victim.
"It has not been possible to identify her yet. However, she's not from our town".
Firefighters also recovered the body of a man in the area of the Boite River in the Dolomites. The third victim was a 56-year-old Czech tourist - not a Pole as initially reported - whose car was swept away by flood waters caused by the extreme weather. His 43-year-old wife was rescued, although she was in critical condition in hospital suffering from several injuries and hypothermia.
It is possible that all three victims are foreigners, according to Italian police sources.
A violent bout of torrential rain caused a huge mass of earth and mud to slide late on Tuesday and caused flooding after several water courses, including some usually tame streams, burst their banks. The disaster comes a year and a day after a similar landslide at Refrontolo, in the province of Treviso, in which four people died. The Cadore area itself is not new to such disasters, as an landslide there claimed two lives in July 2009. Prosecutors in the nearby city of Belluno have opened a probe into the disaster.
But San Vito di Cadore Mayor Roberto Del Bon dismissed talk that the event could have been prevented. "Not even science could forecast something like this," Del Bon said.
He also thanked volunteers and the emergency services for their work.
"A delay in the rescue effort would have made the toll of this tragedy even worse," he said. Veneto Governor Luca Zaia called on the national government to adopt a "Marshall plan" with major spending to make Italy safer from flooding and landslides.
Italy has been hit by several disasters caused by extreme weather in recent years.
Making matters worse, illegal construction is blamed by experts for eroding the natural defences that help prevent floods.
All of this contributes to making Italy especially prone to disasters when extreme weather strikes.