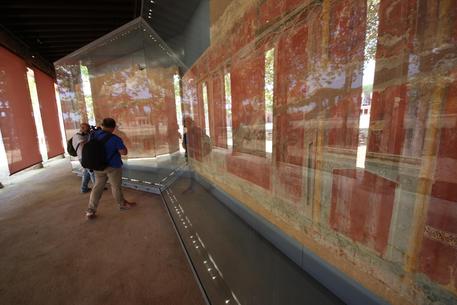 (ANSA) - Pompeii, August 3 - Pompeii's Palestra Grande (Large Gymnasium) reopened on Monday after seven years, inaugurated by Culture Minister Dario Franceschini.
What was once a gym where youth sport clubs promoted by the Emperor Augustus could train consisted in Antiquity of a large rectangular building surrounding an open green space with porticoes on three sides shaded by a double row of plane trees and with a swimming pool in the middle.
Along with the gym, Franceschini unveiled a permanent exhibition of frescoes found at nearby Moregine, a site about 600 metres south of the walls of Pompeii near the mouth of the river Sarno.
They were discovered by chance in 1959 during construction of the Naples-Salerno motorway, adorning the walls of what turned out to be a building with at least five frescoed tricliniums (dining rooms) facing on to a courtyard surrounded by porticoes.
The frescoes dating back to the era of Nero (54-68 A.D.) are now housed in a permanent exhibition at the Palestra Grande, displayed in three groups depicting the Muses, the twins Castor and Pollux, and the spirit of the river Sarno.
Franceschini said that the tide has turned at the archaeological site, and UNESCO inspectors agreed. "This is another step forward, of the many that we've made in the past two years with respect to the Memorandum of Understanding signed with the EU commissioner," Franceschini said.
The ancient Roman site has been dogged by labour strife and structural frailties, service dysfunctions, and possible infiltration by the local Camorra mafia.
Less than two weeks ago, on July 24, the site unexpectedly closed to the public due to a meeting of labor unions, an action that Franceschini said caused "incalculable damage" to Pompeii by alienating visitors.
"I hope that news with international importance like today's has the same prominence as the controversy that followed the (labor union) assembly," Franceschini said. Meanwhile, Campania Governor Vincenzo De Luca said he was looking to move ahead with the Great Pompeii Project, a 75-million-euro EU restoration grant that must be used by the end of 2015.
"(It's) a gold mine that we have to take full advantage of," De Luca said, adding the focus will be on mobility and train connections "to make the most of what is one of the biggest flywheels of Italian tourism".
The Palestra Grande will be included in the culture ministry's A Night at the Museum program, in which all State museums and sites are open 8pm-midnight on the last Saturday of the month, until the end of the year.