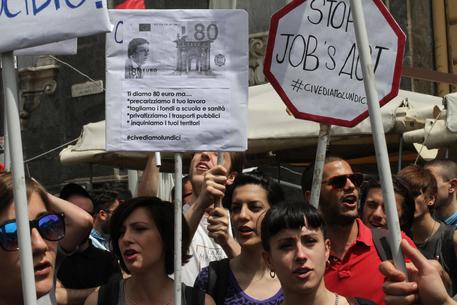 (ANSA) - Rome, July 31 - Premier Matteo Renzi said there was no cause for alarm after preliminary data released by Istat on Friday showed that Italy's unemployment rate climbed to 12.7% in June, up 0.2 of a percentage point on the previous month. The national statistics agency said the number of unemployed people was 85,000 (2.7%) higher in June than in the same month last year, while the unemployment rate was 0.3% of a percentage point higher than a year ago. Furthermore, Italy's youth unemployment rate climbed to 44.2% in June, the highest level since Istat started publishing monthly and quarterly data in this problem at the start of 1977.
The rate of unemployment for under-25s on the job market was 1.9 percentage points higher than in May. However, the number of people considered "inactive" because they are not in work or actively looking for a job dropped 0.2 of a percentage point to 35.9%.
The data was seized on by opposition politicians as evidence that Renzi's efforts to combat unemployment, including his controversial Jobs Act labour reform that softens the law on unfair dismissal, were not working.
"Renzi superficially promised that the labour market would get going thanks to the epoch-making changes in his Jobs Act," said Marco Marin, a Senator for Silvio Berlusconi's opposition centre-right Forza Italia (FI) party.
"Now it's evident that the mountain gave birth to a mole hill". Renzi downplayed the importance of Friday's rise in unemployment, which peaked at 13% last year, saying the jobs market is going to be one of the last things to pick up as Italy gradually recovers from years of recession. "It's quite understandable because employment is the last thing to get going after a period of crisis," Renzi told a news conference after a cabinet meeting. "The employment data continues to have positive and negative aspects. They were extraordinary in April, then negative in May and June. "That does not jeopardize the positive signal, but obviously it shows there's still lots to do". Those sentiments were echoed by Labour Minister Giuliano Poletti. "The June figures confirm that we are faced with data subject to the fluctuations that characterise an economic recovery that is starting to materialise," he said. Poletti also stressed that the "employment rate has remained basically unchanged".
Istat said that in June 2015 22.297 million people were employed in Italy, while 3.233 million were unemployed.