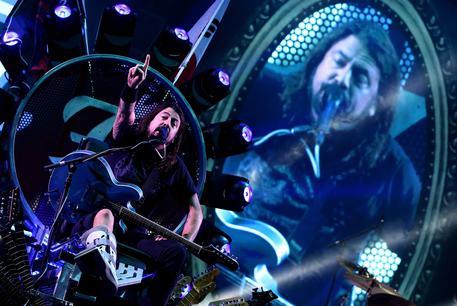 (by Federico Pucci). (ANSA) - Milan, July 31 - "Ci vediamo a presto, Cesena" (See you soon, Cesena) - Foo Fighters frontman Dave Grohl replied in Italian this morning on social media and the American band's official site to a video invite sent from the lawn of the Hippodrome Park of Cesena that went around the world on YouTube.
Some 1000 rock musicians had gathered in the central city July 26 to perform 'Learn to Fly,' a famed piece by the Grohl group, in a performance worthy of the Guinness book of Records and immortalised in a clip that is already viral.
"I had a crazy idea: I want to ask Dave Grohl to play in Cesena," said Fabio Zaffagnini, launching the fundraising for the project called Rockin' 1000, an idea that thanks to the video published Thursday ended up on the pages of major international websites, from Time to NME, from Spin to BuzzFeed, and reached nearly four million views in a few hours.
The scope of the Rockin' 1000 was to attract the attention of the American group to convince them to return to Emilia-Romagna 18 year after the last time, perhaps by adding a date to their Italian tour that takes them November 13 to Casalecchio di Reno (in Bologna province) and November 14 to Turin.
The "crazy idea" hit Fabio in May last year - after months of preparation for a December 18 working group on a crowdfunding campaign.
The initiative immediately grabbed international media attention and in March Marco Sabiu, who previously worked with Morricone, Pavarotti, Ligabue and the Take That, joined the project as orchestra director of the 1000 Rocker.
At the end of May the crowdfunding target was met with 44,788 euros gathered in seven months and Fabio and his team worked to bring together the technicians and collaborators and above all musicians (350 guitarists, 250 singers, 250 drummers and 150 bassists) necessary for the undertaking that meanwhile received the backing of the city council, Confcommercio and Confartigiano and partnership with 29 schools and music circles.
The result of a year of efforts is a high impact clip that caught the attention of the Foo Fighters themselves who commented on Twitter with an Italian "Che Bello" adhering to the #Rockin1000 campaign.
The greeting by Grohl, the former drummer for the grunge band Nirvana, is the achievement of a 'crazy idea' launched on the net a year ago.