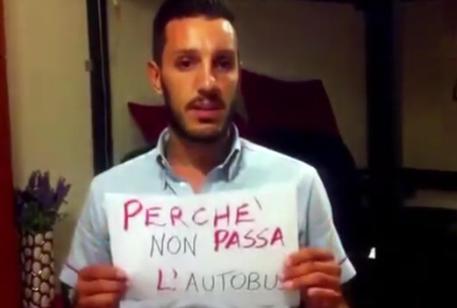 (ANSA) - Rome, July 30 - A Rome bus driver who was suspended indefinitely after posting an online video complaining about his employer ATAC said he had a chance Thursday to explain himself to the city's new councillor for transportation.
Driver Christian Rosso said that he sat down with Stefano Esposito on Thursday to discuss the situation at the unpopular public transport company.
In the video posted on Facebook, Rosso described working conditions faced by Rome bus drivers and why service isn't guaranteed on some lines.
He claimed that he has arrived at work some days to find there was no bus available for him to drive.
"Esposito wanted to understand everything that happened," said Rosso after the meeting. "As transport councillor, he doesn't want to get in anyone's way but he made it clear that he will remain close to me," the driver said.
Hundreds of bus drivers took part in a protest outside Rome's city hall on Wednesday against Rome Mayor Ignazio Marino's plans to look for an outside investor for the struggling ATAC.
Protesters expressed solidarity with the suspended bus driver, chanting "We are all Christian Rosso".
Marino has warned that the alternative to seeking an outside investor is to shut down ATAC and take its books to court.