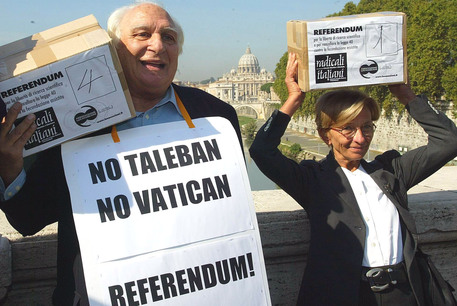 (ANSA) - Rome, July 28 - Radical Party leader Marco Pannella expelled fellow founding member Emma Bonino live on the air on Radio Radicale party radio station, Corriere della Sera newspaper reported Tuesday.
"Mrs. Bonino works hard, but not with us," Pannella said.
"She runs from one part of the world to the other, but what she actually does we only hear about through the rumor mill," he went on to say of Bonino, a veteran politician who served as EU health commissioner in the 1990s, as trade minister under the second center-left government of Romano Prodi (2006-2008), and as foreign minister during the center-left government of Enrico Letta (2013-2014).
"Bonino can go anywhere, I can't," Pannella went on. "I'm trying to get to the president of the Republic, who is very busy," he said.
"But if she wants a meeting, she gets in within five minutes," Pannella said of Bonino, who was tipped earlier this year as a possible replacement for outgoing President Giorgio Napolitano.
"She acts like she has nothing to do with the Radicals," Pannella said, adding he personally intervened to get her appointed to all her posts.
"She works a lot, but not for us," he said. Bonino's reply was reportedly curt.
"Are you out of your minds?" she scoffed at reporters querying her about her alleged ousting from the party.
Bonino recently recovered after being treated for breast cancer.