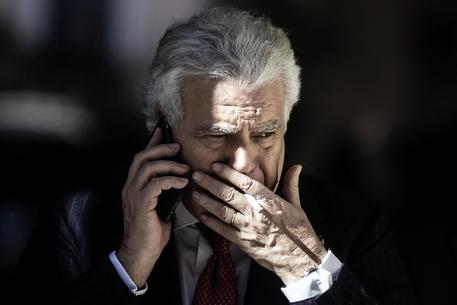 (ANSA) - Rome, July 23 - Forza Italia (FI) heavyweight Denis Verdini on Thursday told FI chief Silvio Berlusconi he was splitting off to form his own group in parliament, sources at a meeting between the pair told ANSA. "I have the numbers," the ex-close aide of the three-time premier said during the "long and cordial" meeting, they said. Relations between the media magnate and his former national coordinator have been tense ever since Berlusconi pulled out of a tacit reform deal with Premier Matteo Renzi after Sergio Mattarella was elected Italian president.
Berlusconi said the allegedly one-sided choice broke the pact, a contention Renzi denied.
Verdini has reportedly been amenable to renewing the pact, which envisages cooperation in overhauling Italy's slow and unwieldy political machinery.
Verdini, who was indicted for bankruptcy earlier Thursday, has also been at odds with Berlusconi over his plans for FI, which has recently lost top spot on the centre right to the populist anti-immigrant and anti-euro Northern League.
The former premier has lined up new people to take over the heavy lifting Verdini used to do for him, according to political sources.