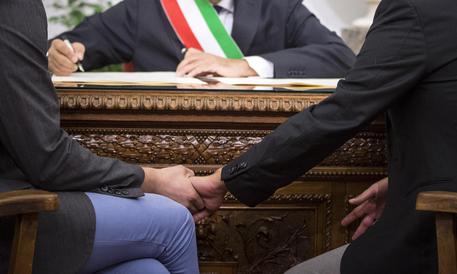 (ANSA) - Rome, July 23 - The cost to the public purse of a new law permitting civil unions for same-sex couples would be about 3.7 million euros in 2016, rising to six million euros in 2017, the finance ministry said in post on its Twitter feed Thursday. As well, the ministry said in its technical report that making gay couples official would cost 22.7 million euros in 2025 due to "a reduced IRPEF personal income tax take due to larger deductions, more family benefits, and more pension benefits to same-sex partners".
Such a law is now before parliament after the European Court of Human Rights complained earlier this week that Italy should provide such legislation to protect the rights of gay couples. The Senate justice committee said it was waiting for more information from the finance ministry as part of its review of proposed legislation on civil unions. Meanwhile, Interior Minister Angelino Alfano said in a radio interview that while the government wants to strengthen human rights, he would draw the line at legislation allowing same-sex couples to adopt children. "We say 'yes' to the strengthening of individual rights but we fear that this bill could be used to achieve the adoption of children, to which we are opposed," said Alfano, head of the New Centre Right (NCD) political party that is in a coalition government with the center-left Democratic Party (PD). He said he also doubts whether same-sex civil unions should be seen as "the equivalent of marriage" in terms of all the rights the traditional union involves.