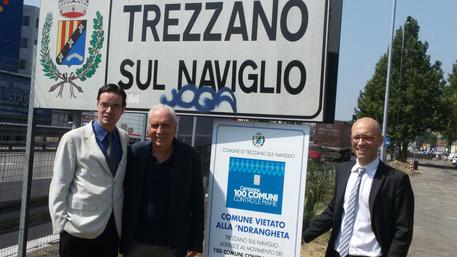 (ANSA) - Milan, July 21 - The authorities in Trezzano sul Naviglio near Milan on Tuesday installed traffic signs banning clans operating under Calabria's powerful 'Ndrangheta mafia from the area.
"Municipality out of bounds to the 'Ndrangheta" and "Mafia clans are not welcome here" read the signs in blue on a white background positioned by mayor Fabio Bottero accompanied by the president of the Lombardy chapter of the national association of municipalities (ANCI), Roberto Scanagatti. The initiative came under the auspices of the ANCI campaign '100 municipalities against the mafia'. For years Trezzano sul Naviglio was considered one of the municipalities with the largest and most deep-rooted 'Ndrangheta presence in Lombardy. "Trezzano wants to free itself from the clans," Bottero said. "Our city hosts companies that are excellent on an international level and it has a healthy social fabric, but we aren't able to remove the problem," he continued.
The anti-mafia road signs have been erected on an experimental bais, but proponents hope transport ministry officials will grant them permanent authorization The 'Ndrangheta has in recent years replaced Sicily's Cosa Nostra as Italy's most powerful mafia because of its dominance of the international cocaine trade.
It has a strong presence across the southern Calabria region and in parts of central and northern Italy and operates in conjunction with other criminal organisations abroad.