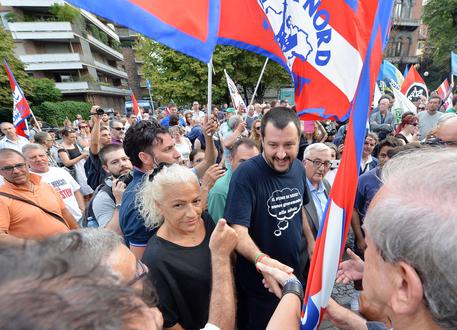 (ANSA) - Rome, July 20 - Premier Matteo Renzi on Monday asked Interior Minister Angelino Alfano to replace the prefect of the northern Treviso province after violent anti-immigrant protests took place on her turf last week.
Prefect Maria Augusta Marrosu agreed to bus 101 refugees from the town of Quinto di Treviso to a former barracks located midway between Treviso city and a town called Casier after Quinto residents flanked by rightwing extremists from the Forza Nuova group staged two days of protests - including burning mattresses meant for the asylum seekers.
Marrosu at the weekend thanked the refugees for not reacting to the protests, which she said "had reached inconceivable levels".
She also said the asylum seekers had been quartered in Quinto because the barracks, which had been authorities' first choice, was not made available until later.
Governors from the anti-immigrant, anti-euro Northern League party have been inciting mayors in the Italy's wealthy northern regions to fight the arrivals of asylum seekers.
Among them is Veneto Governor Luca Zaia, who complained about the "Africanization" of his region through the admission refugees into his area.
Similar violent protests also took place in Rome, where protesters including extreme rightwingers from the Casapound group blocked access roads, hurled bottles and insults at a bus carrying 19 asylum seekers to a reception center in the outlying Casale San Nicola district.
They also burned garbage and threw chairs at police, 14 of whom were injured.
Rome Prefect Franco Gabrielli was adamant that the protesters would be cleared.
"We won't take any steps back," he said, calling the demonstrations "indecent and unseemly" and urging swift identification and prosecution of the culprits.
Alfano said he will replace the Treviso prefect at the next cabinet meeting.