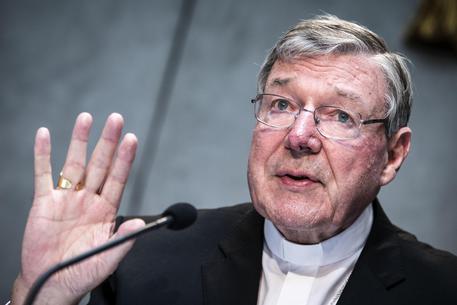 (ANSA) - Rome, July 20 - An Australian cardinal leading efforts to clean up Vatican finances has courted controversy again - after a much-criticised stance on sex abuse - by chiding Pope Francis for his landmark encyclical on climate change.
George Pell, who last year likened a typical victim of sex abuse to hitchhikers, and the Church to the truck they happened to have taken, told the Financial Times that the Church had "no particular expertise in science".
Pell told the Financial Times the church had "no particular expertise in science".
"The Church has got no mandate from the Lord to pronounce on scientific matters," he said, adding "we believe in the autonomy of science." Pell's comments came a month after Francis released his historic encyclical, 'Laudato si', calling on humanity to fight global warming.
"We do need to slow down and look at reality in a different way, to appropriate the positive and sustainable progress which has been made, but also to recover the values and the great goals swept away by our unrestrained delusions of grandeur," the pope wrote.
"The urgent challenge to protect our common home includes a concern to bring the whole human family together to seek a sustainable and integral development, for we know that things can change." The 192-page document, whose English title is Praise Be to You: On Care for Our Common Home, calls on humanity to be more motivated and to improve education to save the environment.
"The earth, our home, is beginning to look more and more like an immense pile of filth," Pope Francis wrote.
"The climate is a common good, belonging to all and meant for all.
"At the global level, it is a complex system linked to many of the essential conditions for human life.
"A very solid scientific consensus indicates that we are presently witnessing a disturbing warming of the climatic system." Pell is a well-known climate change skeptic.
He was appointed to reform the Vatican's finances nearly 18 months ago.
Last August Pell enraged survivors of clerical sex abuse by comparing the Vatican to a trucking company that could not be blamed if a driver molested a hitchhiker.
Pell made the remark while testifying via videolink from Rome to an Australian probe into historic abuse and alleged cover-ups when he was Melbourne archbishop in the 1990s.
Saying it would not be appropriate for legal culpability to be "foisted" on church leaders, he drew an analogy between the Catholic Church and a trucking company, citing a hypothetical example of a case involving a woman who was molested by a truck driver.
"It would not be appropriate, because it's contrary to the policy, for the ownership, leadership of that company to be held responsible," Cardinal Pell said.
"Similarly with the church and the head of any other organisation.
"If every precaution has been taken, no warning has been given, it is, I think, not appropriate for legal culpability to be foisted on the authority figure.
"If in fact the authority figure has been remiss through bad preparation [or] bad procedures or been warned and done nothing or [done something] insufficient, then certainly the church official would be responsible." Nicky Davis from the Survivors Network of Those Abused by Priests (SNAP) was in the audience of the royal commission during Cardinal Pell's comments.
She said the truck analogy left the audience "open mouthed in shock".
"We were literally saying to each other, 'Did he really just say that?'," she said.
"He shows that he really has absolutely no conception of what is appropriate or inappropriate behaviour and what are appropriate or inappropriate things to say to survivors.
Dr Cathy Kezelman from Adults Surviving Child Abuse said the "outrageous" and "appalling" analogy could do a lot of damage.
"The victims are already in this process of being repeatedly traumatised. To have their experiences denied yet again...drives a knife into the wound and twists it yet again," she said.
http://popefrancisnewsapp.com/