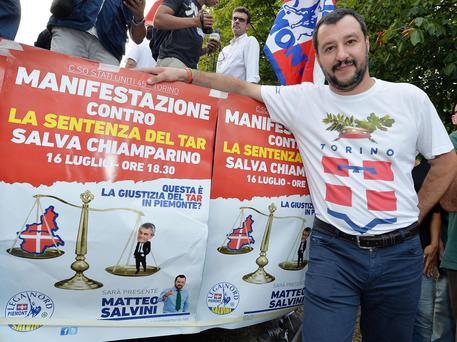 (ANSA) - Rome, July 17 - The leader of Italy's Northern League party Matteo Salvini said on Friday that state authorities should stop opposing anti-immigrant feeling in the country after police clashed with people protesting against the arrival of refugees in Rome and protesters near the northern city of Treviso forced local authorities to move migrants.
Police earlier responded with a baton charge after anti-immigrant protestors who had set up a road block threw a barrage of objects at them in the Casale San Nicola suburb.
Rome prefect Franco Gabrielli had sworn to clear the road block and ensure the transfer of refugees went ahead as planned.
Other protests at Quinto near Treviso ended after authorities moved the 101 migrants to a barracks farther away from the city.
"Instead of giving the mayors and citizens that are protesting a hard time, prefects should do their job and stop coddling thousands of illegal immigrants," Salvini said.
"Host them at the prefect's office or at your house, if you want," he added.
The Northern League has stepped up its campaign against migrants in recent months. In June, the governor of the northern region of Lombardy Roberto Maroni told local officials to stop accepting irregular migrants from other parts of Italy.
A migrant crisis has fuelled political divisions in the country, which is struggling to emerge from an economic slump that has thrown many people into unemployment or low-paid work.