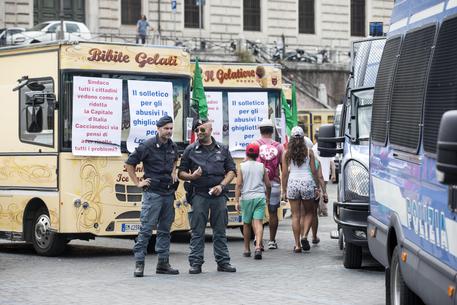 (ANSA) - Rome, July 10 - Local police on Friday began cracking down on unauthorized street vendors in the historic center of the Italian capital after a much-awaited ordinance went into effect at midnight.
Some 250 police were involved in the operation, prohibiting street vendors from stopping in the historic center and requiring them to move to other areas. The sites affected include the Colosseum, the Imperial Forum, Piazza di Spagna, Piazza Venezia and Circus Maximus. About 20 street vendors reportedly gathered near the Bocca della Verità (Mouth of Truth) to protest being barred from the Colosseum area.
Rome mayor Ignazio Marino and councillors Maurizio Pucci and Marta Leonori made an on-site inspection at the Imperial Forum, where they spoke to the press and some tourists. Marino said he would encourage Italian prime minister Matteo Renzi to come and see the difference.
The mayor added that the impetus had come during the election campaign and after US president Barack Obama's visit, during which the street had been closed to traffic. ''In 1877 this archaeological area was called the most important on the planet, and it must be managed and valorized accordingly by state and local authorities,'' he added.