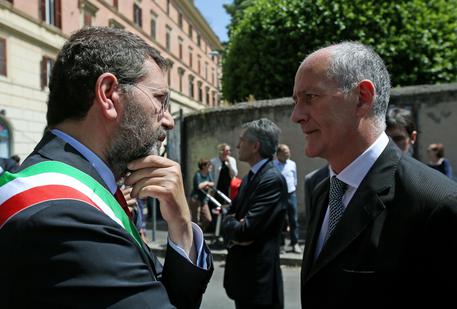 (ANSA) - Rome, July 10 - Rome Prefect Franco Gabrielli has saved Mayor Ignazio Marino from seeing his city council dissolved for mafia infiltration for the moment but has stopped short of saying the council is squeaky clean.
In a statement saying he was recommending Interior Minister Angelino Alfano should not dissolve the Rome council because of the 'Capital Mafia' case, Gabrielli's wording appeared far from definitive.
"The elements gathered on Mafia infiltration have a significant and concrete character," he said, but they do not point in an "unequivocal way".
Therefore, far from letting the Rome council off the hook, the prefect said the Capital Mafia probe, as found by investigators, had shown major infiltration of council contracts by a crime cartel headed by former rightist terrorist and gangster Massimo Carminati and leftwing cooperative chief Salvatore Buzzi.
This penetration of work on Roma camps and migrants - which the ringleaders said were more profitable than drugs - did not "point" straight at Marino, however, he said.
Gabrielli said that, compared with the previous centre-right administration of rightwing mayor Gianni Alemanno, who had placed several former rightists in municipal companies, there had been a "discontinuity".
But while Marino voiced relief at the left-off - although Gabrielli said the council, would continue to be monitored - the council's secretary-general, Liborio Iudicello, who had worked closely with Alemanno, felt compelled to resign.
Marino has repeatedly said much of the wrongdoing emerged because of his reports to police and vowed to stay on in power until 20123, winning re-election in 2018.
The mayor, whom polls say is one of the least popular mayors in Roman history, was heckled Thursday when he went to a Rome metro stop where a five-year-old boy had fallen to his death in an unattended lift shaft.