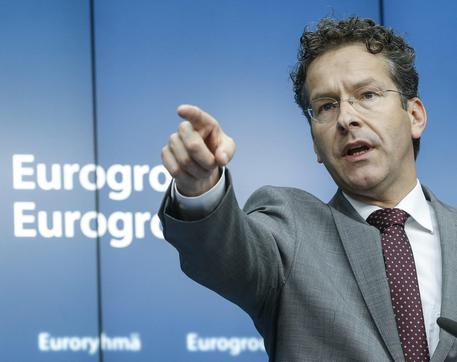 (ANSA) - Rome, July 2 - The head of the Eurogroup on Thursday dismissed Greek hopes of getting a "friendlier" bailout offer if voters reject the current one in Sunday's referendum.
Jerouen Dijsselbloem was speaking to the Dutch parliament shortly after Greek Finance Minister Yanis Varoufakis said he would quit if the Yes vote prevailed.
Meanwhile Standard & Poor's came out with a prediction that Greece's exit from the eurozone could cost Italy an extra 11 billion euros to service its debt due to sharply higher interest rates.
The ratings agency said Italy would be the eurozone country to face the "biggest" rise in interest costs in the case of a 'Grexit'. It forecast this could cost the eurozone as a whole an extra 30 billion euros in the 2015-2016 period.
And the International Monetary Fund said Greece needs fresh funding of 50 billion euros ($56 billion) to meet its debt obligations up till 2018.
Greece's finances have deteriorated because of a failure to enact needed reforms, the IMF said. Instead of a forecast in 2014 that the debt-to-GDP ratio would fall to 128%, the debt is back on course to reach 150% by 2010, the IMF said.
Dijsselbloem told the Dutch MPs that it will be "incredibly difficult" to offer a third bailout plan if Greeks vote No to the creditors' current proposals. "If the result is No, how can you accept a programme?" he said.
The statement was an indirect response to Varoufakis's announcement he would resign if the Yes vote won but that if the No vote prevailed then talks would immediately resume with the country's creditors.
Dijsselbloem said the Greek government was "wrong" if it thought that a No to would bring "a better package, less tough, more friendly". He said that in the meantime the Greek economic situation had got a lot worse, making any new bailouts much more difficult.
The latest opinion polls, meanwhile, showed the Yes vote still ahead in the campaign, but its lead over the Nos narrowing significantly.
Greek Premier Alexis Tsipras has urged his beleaguered country to vote No, sending a clear anti-austerity signal to Europe.
In contrast to Djisselbloem, Tsipras said a No win would lead to a "better agreement". In announcing his intention to quit, in an interview with Bloomberg TV, Varoufakis also said his government would sign no deal that does not involve a restructuring of Greece's debt. "I'll hand in my resignation if the Yes vote wins," he said. "We will not sign any agreement with out the restructuring of the debt". He added that if the No vote wins, "we will resume negotiations immediately".
S&P also said there is approximately a "50%" probability that Greece leaves the eurozone. It added that the eventual impact of the so-called "Grexit" would be "serious" for Greece but "contained" for the remaining eurozone members.
Also on Thursday, Italian President Sergio Mattarella said he hoped Greece might quickly find a solution to its present economic crisis within the framework of the European Union.
"We hope that Greece might quickly find a balanced agreement for resuming a path of stability and growth within the hive of the European Union, to which Athens belongs," Mattarella said.
Greek voters are almost evenly split heading into the referendum in three days that European leaders said could plunge the country "into economic darkness" as Kathimerini online reports. A GPO poll cited by euro2day.gr said 47% leaned toward a Yes vote, an endorsement of austerity and the international bailout. The No camp, the government's position rejecting those terms, was 43%. The margin of error in the survey of 1,000 people was 3.1 percentage points.
GPO said later, however, that the survey contained "incomplete" data and threatened legal action against those citing it.