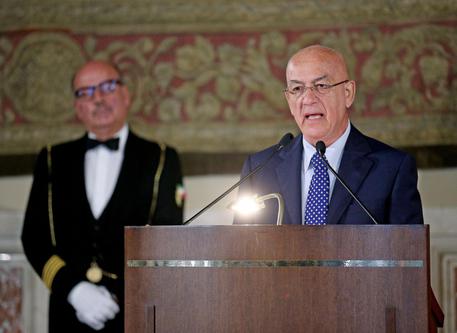 (ANSA) - Rome, June 23 - Italy's privacy chief on Tuesday warned the government about the risks of profiling inherent in remote-monitoring measures attached to its landmark Jobs Act labour-market reform - just as the House Speaker, the country's third-highest official, called for a much-needed clarification of those alleged 'snooping' moves.
The government's controversial Jobs Act must not allow "unjustified and invasive forms of control" of workers, said the head of Italy's privacy watchdog, Antonello Soro. "The closer monitoring of systems and resources must not translate into undue profiling of the workforce," Soro said in his annual report to parliament. "It is increasingly necessary to reconcile companies' demands for efficiency with the protection of rights," he stressed.
In today's wired world, however, he added, some sort of surveillance was inevitable.
"The entire globe is connected up so we're all vulnerable," he said.
Controversy was triggered last week by changes to labour laws for remote employees - those who work outside of a conventional office - connected with the government's Jobs Act .
Under this, there is no requirement for union agreement or ministerial approvals, if controls over those workers increase through their use of their employers' computers and telephones from remote work sites.
Lower House Speaker Laura Boldrini said she hoped parliamentary debate of the measure would bring "clarity to the doubts that have emerged in recent days".
Pending a clear view of the alleged spying moves, there was better news for workers on the Jobs Act front Tuesday.
The labour ministry, in fact, confirmed that new work-life balance measures in the Jobs Act, including an extension of the ages of children for which employees can request parental leave, will become structural once the decree on social welfare is definitively approved.
An enabling decree to the Jobs Act, proposed by Labour Minister Giuliano Poletti and approved earlier this month, would extend the ages of children for which employees can request parental leave.
The measure would extend the time employees can choose to take optional six-month parental leave, increasing it for children aged up to six years (from the current three years) for those willing to take the leave at 30% of their salaries, and from eight to 12 years of age for parents wanting to take unpaid leave.
The measure would go into effect on an experimental basis later this year.
If financial coverage for this measure is lacking in 2016, the system will revert back to the previous norm.
As well, the draft decree contains a further measure giving parents the option of transforming parental leave into part-time employment at 50% of pay.
The decree would also extend unemployment benefits to companies with five or more employees, but would reduce the amount of time laid-off workers can collect the benefits, to 24 months (30 months for the construction sector) from the current 48 months. However that figure can rise to 36 months if employees who are not laid off agree to so-called solidarity contracts, in which they take pay cuts so their laid-off colleagues can keep collecting unemployment.
Also on Tuesday, it emerged that Italy saw 577 violations of privacy that were criminally relevant last year, and almost 630 countermeasures were taken.
In all, sanctions of some five million euros were meted out.