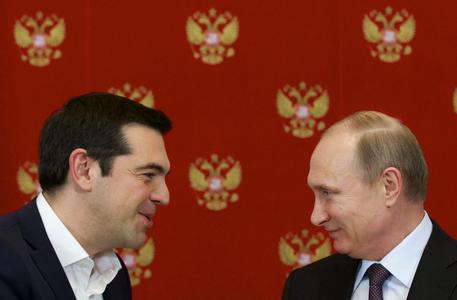 (ANSA) - Rome, June 19 - The European Central Bank (ECB) on Friday agree to increase emergency loans to Greek banks for the second time this week, but by less than requested, according to some media report.
Although the ECB did not confirm the amount through its Emergency Liquidity Assistance (ELA) program, the Financial Times said it was about two billion euros - less than the three billion requested by Greece's central bank.
The increase was only valid Friday and on Monday, when crucial summit of European leaders is planned, added the news paper.
Greek banks have suffered steep withdrawals - about one billion euros taken out by nervous account holders in Thursday alone.
In the midst of the crisis, Greek Premier Alexis Tsipras said Friday that Europe must make a "courageous choice" in policy and opt for less focus on austerity.
Amid tense, last-ditch negotiations with Greece's lenders, including the International Monetary Fund (IMF), the European Union (EU) and the ECB, Tsipras travelled to Russia.
There, he met with Russian President Vladimir Putin and in St. Petersburg, told an economic forum that the "center of world economic development is shifting to other areas," and away from Europe.
Tsipras added that Europe should not consider itself to be the naval of the world.
Russia is considering providing financial assistance to Greece, Deputy Prime Minister Arkadi Dvorkovich told Russia Today on Friday. "We will support any decision proposed by Greece and its European partners. If Greece needs financial assistance, we will look into the issue".
Russia will be able to consider providing financial assistance to Athens only if the Greek government asks for it, said Kremlin spokesman Dmitri Peskov.
Meanwhile, Italian Economy Minister Pier Carlo Padoan said Friday if Greece ultimately leaves the euro, the shock to European financial markets would be felt.
But, he added, it would not severely damage Italy because the national financial situation "is much improved" and investor confidence more stable.
"I would not worry if there are changes in (bond) yields because the situation in 2015 is very different from 2012," in the depths of a financial crisis, said Padoan. As well, the ECB has created instruments to "counter the contagion effect" within the financial system, Padoan added.
In Berlin, European Commission President Jean-Claude Juncker said he did not "understand" Tsipras and could not rule out a 'Grexit' from the eurozone.
"I've always warned about the fact that that I can't avert the failure of talks at all costs," he said.
Earlier in the day Tsipras said he was hopeful Athens could reach a deal with its creditors to avert a default with the help of eurozone leaders. "Monday's summit is a positive development on the road to an agreement," Tsipras said in a statement. European Council President Donald Tusk called the extraordinary eurozone summit after a Eurogroup meeting failed to progress on a deal Thursday amid widespread calls for Athens to make new proposals. "There will be a solution based on the respect of EU rules and democracy, which will allow Greece to return to growth," Tsipras said.
IMF Managing Director Christine Lagarde on Thursday urged Greece to get back to the negotiating table and said Athens risked defaulting on its debt with the agency at the end of the month.
"If Greece does not pay the installment it owes us by June 30, it will be in default with respect to the IMF," Lagarde said, adding there would be "no grace period or possibility of delay". Berlin said Friday that it hoped Greece stays in the eurozone.
"We are sorry that there was no step forward yesterday, but it's not too late and we hope for an agreement," said Chancellor Angela Merkel's spokesman Steffen Seibert.