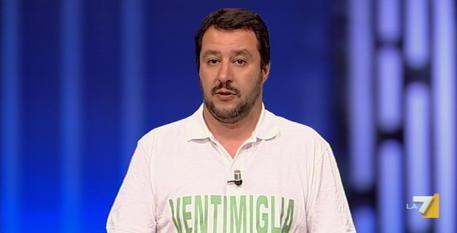 (ANSA) - Milan, June 17 - Northern League leader Matteo Salvini said Wednesday that he did not need the pope's forgiveness.
He was commenting after Pope Francis asked the faithful to pray for forgiveness for those who "close the door" to refugees.
"How many refugees are there in the Vatican?" Salvini, who has called for a hard-line stance in dealing with the Mediterranean migrant crisis, told his party's Radio Padania.
"The problem is that the refugees are a quarter of those who arrive (while the rest are economic migrants). We do't need to be forgiven". The League's governor of Lombardy, Roberto Maroni, has been leading a drive to reject asylum seekers being relocated to other parts of the country after arriving landing in southern Italy.