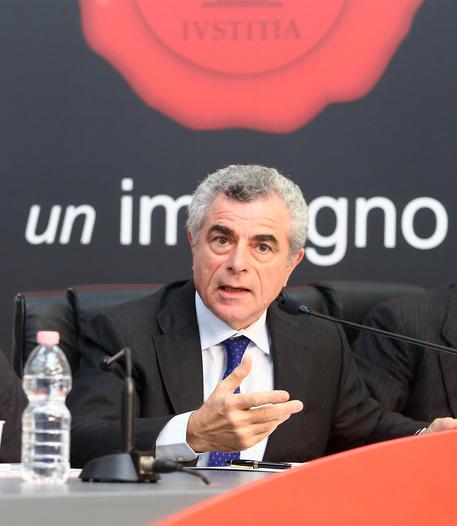 (by Chiara Rancati) (ANSA) - Le Bourget, June 15 - Italian defence and aerospace giant Finmeccanica is interetested in taking a controlling stake of Vega rocket-launcher maker Avio, raising its share from 14%, and could make it "if not the first, then the second or the third" purchase of its new management term.
"Space is important, Italy cannot not have a projection into space," said Finmeccanica CEO Mauro Moretti as he strolled around the stands of the Paris Air Show.
Avio chief Pier Giuliano Lasagni went further, saying that a "step" towards going under Finmeccanica's wing "will be made this year and welcoming the idea.
"It's clear that there's an interest by Finmeccanica, which wants to continue to be present" he said.
"There is talk of a majority or of other forms that can safeguard the activities of the Vega launcher, which is a national patrimony".
The next step, he said, regards "European industrial equilibria which have to be managed," referring above all to the "strong signals from France in the launcher sector, to ensure autonomous access to space.
The Finmeccanica majority option, stressed industrial sources cited by the French press, would meet with the favour of the Italian government - more than an entry by Airbus Safran Launcher. The latter, according to the same sources, is not interested in coming into the share capital with a share that would be too small to let it influence management decisions.
The situation on two other joint ventures featuring Finmeccanica is more fluid.
For the ATR consortium, 50% held by Alenia Aermacchi and 50% by the Airbus group (ex EADS), a whole takeover by the Italians does not appear a goer in the short term, although stubborn rumours persist.
The programme meanwhile announced on Monday the 1,500th aircraft sold, part of an order from Japan Air Commuter- ATR's first sale there.
Also treading water is the MBDA dossier, a missile producer shared by Finmeccanica (25%), the Airbus group and BAE Systems (37.5% each). Airbus has long declared its interest in taking control but there is still no agreement with the co-shareholders.
"It's a question the companies are still talking about and they have yet to find a solution", said Defence Minister Roberta Pinotti at the Show, stressing that the missile sector remains "important" for Italy.