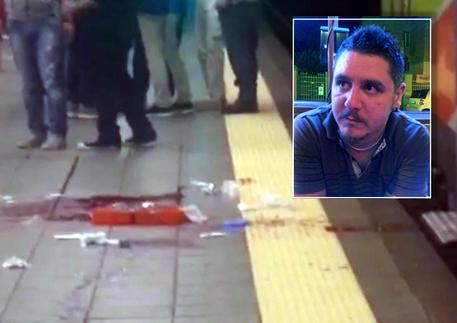 (ANSA) - Milan, June 12 - The Milan flying squad on Friday arrested two young Latin Americans on charges of attempted murder in a brutal machete attack on a train conductor and his off-duty colleague late on Thursday. They are named as 19-year-old Salvadorean Josè Emilio Rosa Martinez - whom police say is the man who wielded the machete - and Ecuadorean national Jackson Jahir Lopez Trivino, 20.
Lopez Trivino, also known as Peligro (danger, in Spanish), was arrested in a 2013 police raid against the MS13 gang which put 25 people, seven of them underage, behind bars. The suspect is in Italy on an expired residency permit, police said.
MS13 has become infamous in Milan for a string of murders, robberies, and beatings.
The victim, Carlo Di Napoli, suffered massive injuries to an arm, with a part of it almost cut off. He underwent surgery lasting around eight hours early Friday, with four specialist surgeons taking part.
"The victim suffered a injury to the left arm, leading to a subtotal amputation," read a statement by Milan's Niguarda hospital. "An attempt was made to recover the arm's functionality". It will take several days to know whether the arm has been saved, according to the statement.
An off-duty colleague who tried to help the conductor suffered head injuries, but his condition is not serious, ANSA sources said. The attack at the outlying Villapizzone station ensued after a group of three to five people of South American origin refused to show the conductor their tickets as they were about to board the train on a line that brings visitors to and from the Expo world's fair. When things got heated, the attacker produced a machete that had been hidden in his trousers, investigators said.
Also on Friday, Lombardy Governor Roberto Maroni said that security on trains must be beefed up, adding that shooting should be an option. "We'll request that soldiers and police be deployed (on trains)," said Maroni, who is from the anti-immigrant, anti-euro Northern League party. When asked whether firearms should be used, he replied: "yes, naturally, it's legitimate self-defence...if it's necessary to shoot, you shoot".
"Zero tolerance and harsh penalties," chimed in Veneto Governor Luca Zaia, who is also from the Northern League.
"Prison straight away, the ideal would be to throw away the key," he added.
"When Maroni was interior minister (in 2008-2011) he failed to argue as passionately against cuts to law enforcement, and railway police in particular," said centrist Italy of Values (IdV) national secretary Ignazio Messina.
"The attackers have nothing to do with the refugees," said Piedmont Governor Sergio Chiamparino, who also chairs the Conference of Regions.
Senate Speaker Pietro Grasso from the ruling Democratic Party (PD) said the incident must not be confused with the immigration issue. "This absolutely insane act must not be confused with the problem of immigration," Grasso said. "We must keep the two things separate," he added. "This act of total insanity could not have been predicted, anywhere in the world...it has nothing to do with the rest of the problems".
The rail line operated by Trenord has documented 44 cases of attacks against employees in the first five months of 2015, the company said.
Of these, 18 were cases of physical aggression and 26 involved violent verbal threats.