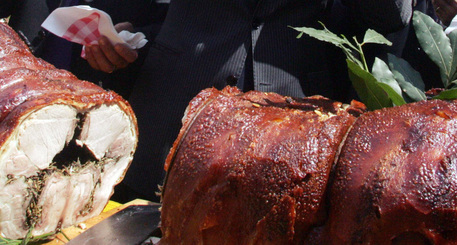 (ANSA) - Milan, May 25 - At least one out of every four Italian dishes has its origins in an ancient Roman recipe, according to farmers' union Coldiretti, which on Monday inaugurated its Milan Expo 2015 exhibit "Ancient Romans' Most Beloved Foods".
The show is housed in the Coldiretti pavilion "No Farmers No Party," and highlights various well-known Italian dishes that had their birth in ancient Rome.
Lazio's famous porchetta, a cooked pork from the town of Ariccia in the Castelli Romani and often used in sandwiches, was known in ancient Rome as "porcellum elixum farsilem," and what the ancient Romans referred to as "oxyporium" is better-known today as balsamic vinegar.
Also on display is hard cider as one of Julius Caesar's favorite drinks, and olive liquor, which the ancient Romans used as a medicinal drink.